A good friend “shared” something on social media not too long ago that really made me roll my eyes. It was about the wanna-be terrorist “Shoe Bomber” Richard Reid. Just before Christmas in 2001, Reid, a Brit, got on an American Airlines plane from Paris to Florida, and while in-flight he tried to light a bomb in his shoe. Other passengers subdued him, and his airplane bombing fizzled. He’s now in prison in the U.S., serving a life sentence without parole.

Part of the posting that my friend copied (he didn’t write it, he just shared it) was this:

Remember the guy who got on a plane with a bomb built into his shoe and tried to light it?

Did you know his trial is over?

Did you know he was sentenced?

Did you see/hear any of the judge’s comments on TV or Radio?

Everyone should hear what the judge had to say.

The judge’s comments were on the court record, of course — a “Joe Friday” lecture to the dorky terrorist (yeah: dorky! That’s his mug shot below). 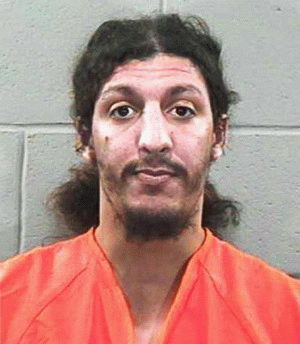 But I have to say, posts like this drive me nuts, because they’re talking like this happened this week. It didn’t. His sentencing was in January …of 2003 — more than ten years ago, not this week.

Of course the results of the trial were widely published in the media at the time — you can look it up. But how many refused to read about it or listen to stories about it because it was reported in the “Lamestream Media”?

The press is considered the Fourth branch of government, and rightly so. To proudly ignore it is to proudly proclaim oneself ignorant, and this is a prime example of what happens when one does ignore the media: amazement at what the judge said when it finally comes to people’s attention. This is not an example of the failure of the press, it’s an example of the failure to pay attention to important developments reported by the press. They are doing their jobs. The people who find this “news” after more than a decade are not.

This is the rest of the post — which I did not check to see if it is both accurate and complete. Note that the author sometimes left it unclear which words are his own, and which words were uttered by the judge, but I decided not to alter it, and just post it as written.

Prior to sentencing, the Judge asked the defendant if he had anything to say. His response: After admitting his guilt to the court for the record, Reid also admitted his ‘allegiance to Osama bin Laden, to Islam, and to the religion of Allah,’ defiantly stating, ‘I think I will not apologize for my actions,’ and told the court ‘I am at war with your country.’

Judge Young then delivered the statement quoted below:

Judge Young: ‘Mr. Richard C. Reid, hearken now to the sentence the Court imposes upon you.

On count 8 the Court sentences you to the mandatory 30 years again, to be served consecutively to the 80 years just imposed. The Court imposes upon you for each of the eight counts a fine of $250,000 that’s an aggregate fine of $2 million. The Court accepts the government’s recommendation with respect to restitution and orders restitution in the amount of $298.17 to Andre Bousquet and $5,784 to American Airlines.

This is the sentence that is provided for by our statutes. It is a fair and just sentence. It is a righteous sentence.

Now, let me explain this to you. We are not afraid of you or any of your terrorist co-conspirators, Mr. Reid. We are Americans. We have been through the fire before. There is too much war talk here and I say that to everyone with the utmost respect. Here in this court, we deal with individuals as individuals and care for individuals as individuals. As human beings, we reach out for justice.

So war talk is way out of line in this court. You are a big fellow. But you are not that big. You’re no warrior. I’ve known warriors. You are a terrorist. A species of criminal that is guilty of multiple attempted murders. In a very real sense, State Trooper Santiago had it right when you first were taken off that plane and into custody and you wondered where the press and the TV crews were, and he said: ‘You’re no big deal.’

You are no big deal.

What your able counsel and what the equally able United States attorneys have grappled with and what I have as honestly as I know how tried to grapple with, is why you did something so horrific. What was it that led you here to this courtroom today?

I have listened respectfully to what you have to say. And I ask you to search your heart and ask yourself what sort of unfathomable hate led you to do what you are guilty and admit you are guilty of doing? And, I have an answer for you. It may not satisfy you, but as I search this entire record, it comes as close to understanding as I know.

It seems to me you hate the one thing that to us is most precious. You hate our freedom. Our individual freedom. Our individual freedom to live as we choose, to come and go as we choose, to believe or not believe as we individually choose. Here, in this society, the very wind carries freedom. It carries it everywhere from sea to shining sea. It is because we prize individual freedom so much that you are here in this beautiful courtroom, so that everyone can see, truly see, that justice is administered fairly, individually, and discretely. It is for freedom’s sake that your lawyers are striving so vigorously on your behalf, have filed appeals, will go on in their representation of you before other judges.

We Americans are all about freedom. Because we all know that the way we treat you, Mr. Reid, is the measure of our own liberties. Make no mistake though. It is yet true that we will bear any burden; pay any price, to preserve our freedoms. Look around this courtroom. Mark it well. The world is not going to long remember what you or I say here. The day after tomorrow, it will be forgotten, but this, however, will long endure.

Here in this courtroom and courtrooms all across America , the American people will gather to see that justice, individual justice, justice, not war, individual justice is in fact being done. The very President of the United States through his officers will have to come into courtrooms and lay out evidence on which specific matters can be judged and juries of citizens will gather to sit and judge that evidence democratically, to mold and shape and refine our sense of justice.

See that flag, Mr. Reid? That’s the flag of the United States of America. That flag will fly there long after this is all forgotten. That flag stands for freedom. And it always will.

Mr. Custody Officer. Stand him down.

So, how much of this Judge’s comments did we hear on our TV sets? We need more judges like Judge Young. Pass this around. Everyone should and needs to hear what this fine judge had to say. Powerful words that strike home.

Please SEND this—-so that everyone has a chance to read it.

Those amazed that the trial is over are simply proving that they’re not paying attention — not doing their jobs as citizens. The only thing “amazing” is that it took them ten years to notice.

27 Comments on “Bashing the “Lamestream Media””