It’s nice when someone else goes on a rant, so I don’t have to!

A story by Mike Straw in last week’s (30 December 2012) issue went for the laugh in the tagline. A reader — Wayne, in the U.S. military and deployed to Afghanistan — thought Mike should have gone more for “thought-provoking.” Let’s start with the story:

Corey Curtis, 44, of Racine, Wisc., pleaded no contest to one count each of felony bail jumping, and failure to pay child support — over $90,000 for his nine kids from six women. Judge Tim Boyle had a dilemma. “This has come up before,” he said at the sentencing. “It’s too bad the court doesn’t have the authority to sterilize.” Assistant District Attorney Rebecca Sommers pointed out that a Wisconsin Supreme Court ruling found that a judge may, as a condition of a person’s probation, order the defendant not to have another child unless he can show he can support that child. “I will make that a condition of the probation,” Boyle said immediately, sentencing Curtis to serve three years’ probation. “He is not to procreate until he can show he can provide for them,” Boyle said, and added that he must also provide for all nine of his current children. His defense attorney objected, saying that condition of probation was not recommended in Curtis’ “pre-sentencing investigation” report. “I’m not following the PSI,” the Judge said as a smile spread across his face. (MS/Racine Journal-Times) …Obliviots not being allowed to breed? A dream come true! 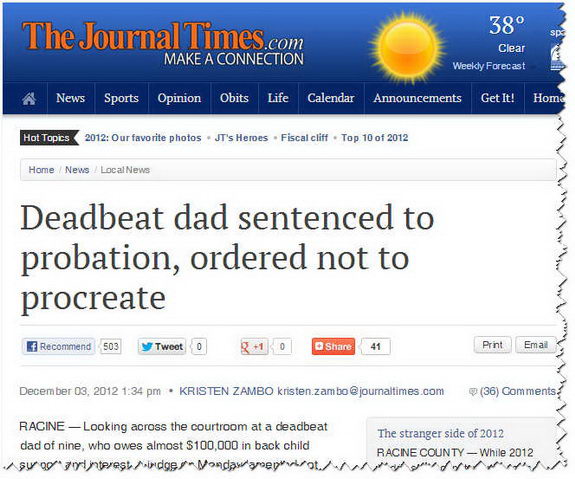 “I hoped to see a better tagline on this story,” Wayne said. He continues:

The Federal Supreme Court (Roe v Wade) says the government cannot interfere with a woman’s reproductive rights. If an unemployed single mother repeatedly gets pregnant by strangers, does drugs, smokes, and drinks heavily in each pregnancy and burdens the state with a dozen drug-addicted, brain damaged children she can’t support, the government cannot stop her from having more wards of the state the taxpayer has to support.

Yet the [Wisconsin] State Supreme Court ruled no man can have a child unless he proves to the government first he can support them. There’s a blanket assumption men can support kids, but again, children are a privilege the government grants a man and can be taken away at any time. Can we simply make all men with incomes under $40k go to the government to apply for a review and permit?

And why just men? This clearly violates the Equal Protection Clause of 14th amendment, yet it passed a State Supreme court. An easy test is this: What if the Court ruled “All Blacks/Latinos can’t have kids until they prove to the government they can support them.” (fun caveat: “unless they have sex with a Caucasian.”)

What happens if he uses birth control and it fails? Or the new “girlfriend” lies about her birth control? Can she go to jail for his violation? Should he get six-sigma defect certifications from Trojan with each box, and video his application, get a notary signed document that the girl attests she’s on birth control, and use all that to show he did his best? Does he have to save all old condoms forever, in case an old girlfriend comes out of the woodwork? Is the judge saying, “You cannot have vaginal sex, and can only fool around with girls who pass a polygraph stating they can be trusted not to trick you?”

What happened to Gay Rights, Blue laws (unenforced sodomy laws for BJ’s and the like) and “keep the government out of my bedroom”? What if this state has anti-sodomy laws? Is he then banned from all sex?

Having children you can’t support is wrong. So is a country with unequal justice systems that steals fundamental rights and only punishes one class of citizen.

Please don’t get me wrong; I support equality. What I came to realize, however, is people don’t want equality — they want the benefits of what they have, plus the benefits of the other group, without any drawbacks. There are many examples of sex, race, religion, sexual preference (I don’t support gay marriage, I do support gay marriage equality), or any time one group eyes another.

What About That, Mr. Publisher?

I might have been as much “up in arms” (minus Wayne’s battle rifle) had this been a government decree on the general male population, but it wasn’t — and I don’t think it’s really heading down the slippery slope, even. Mr. Curtis (from the story) wasn’t just walking down the street and hauled into court: he was facing felony charges. The judge could have sent him to prison (not just jail), but gave him probation instead.

With probation, there can be terms and conditions. And it’s in that context that the restriction was applied. Felons can end up losing any manner of rights — even Constitutional rights, such as the right to vote. And, apparently in some states, even the right to procreate. And I have no doubt this has been applied to both sexes.

But still, thought-provoking indeed. And I’m glad to know of yet another military reader out there in the sandbox being entertained — and provoked — by This is True.