There were a couple of stories I found earlier in the month, but decided to hold until the Memorial Day issue. And they get to be in the blog, since one of them has illustrations you need to see for the complete effect.

The first story is the one that needs illustrations, but be sure you see the second, below that!

When the U.S. Navy SEALs — the SEa, Air and Land special forces — killed Osama bin Laden, it was immediately big news around the world. In Germany, news network N24 put up a logo of SEAL Team 6, which had credit for the operation, while presenter Mick Locher described the raid. Unfortunately, the logo shown was for the “Maquis Special Operations — SEALS Team VI”, not the U.S. Navy SEALs Team 6. The Maquis is a fictional rebel group in the 24th century Star Trek universe, named for World War II French Resistance fighters; the logo was created by a Star Trek fan club, and Team 6 members are Klingons. “They don’t have the skull in their emblem for nothing,” Locher said of the logo. He didn’t seem to notice the weapon in the logo is a phaser, that the skull was extra large (because it’s a Klingon’s), or that the skull’s eye patch is attached with bolts. (RC/Sydney [Australia] Morning News) …Give him a break. Real SEALs often have oversized heads, could well have bolted-on parts, and might carry space-age weapons!

And the closest thing to a “logo” that the real SEALs Team 6 has — their uniform patch: 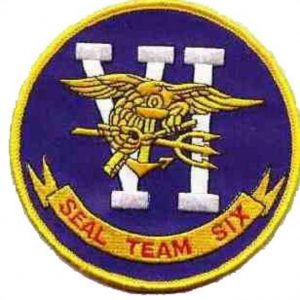 For the eleven readers who don’t know what a “Klingon” is, they’re a 24th century science-fictional Star Trek alien race known as fierce warriors who evolved armor-plated foreheads:

Worf (played by Michael Dorn) is the best-known Klingon because he chose to join the “Federation” (the good guys). And, well, because he was one of the stars of the show….

The first story, I found amusing. The second one is a bit more “amazing”:

The Rev. Jim Moats of the Christian Bible Fellowship Church in Newville, Pa., had been letting his congregation believe that he had been a U.S. Navy SEAL. After Osama bin Laden was killed, the local newspaper interviewed local SEALs, including Moats, about the SEAL team that got the terrorist. After the story was published, readers smelled a fraud because the stories he told were actually from the Steven Seagal movie Under Siege. When confronted, Moats admitted he was never a SEAL, and had bought his gold Trident medal at a military surplus store. “It was my dream” to be a SEAL, Moats said, but “I don’t even know if I would have met the qualifications.” How could he not know? “I never knew what the qualifications were,” he admitted. “We deal with these guys all the time, especially the clergy,” said actual former SEAL Don Shipley, who helps maintain the confidential data base of all SEALs. Shipley says he doesn’t think Moats should be prosecuted, because derision by people who find out about the fraud online is a form of “street justice” that has brought Moats dishonor and shame. “I think just having his ass spanked is enough for him that he won’t do it again any longer,” he said. (RC/Harrisburg Patriot-News)…Wilco, sir!

One quote really surprised me: not that the retired SEAL saying this happens a lot, but that “especially the clergy” impersonate them!

“It’s amazing how many of the clergy are involved in those lies to build that flock up,” Shipley went on to say. “He has mental problems, plain and simple. His wife and friends and flock believe it, and he starts believing it himself. That is not an excuse. The pastor is very aware of what he did.” Shipley called Moats himself to confront him over the lie.

He admits he only made “passing reference” to what he had done the next Sunday to his parishioners, saying he had “gotten caught up in moments and been untruthful,” and preferred not to go into detail because that happened to be Mother’s Day.

The newspaper said he “hopes that his congregation will forgive him and stick with him when the extent of his deception becomes known,” but “knows that people inside and outside his church will be angry over what he has done because he is a minister who is supposed to tell the truth.” Um, yeah.

Thou Shalt Not Bear False Witness

But I remain fascinated that this isn’t particularly unusual, that “lots” of pastors tell such lies. Astounding. Repent, gentlemen!

Memorial Day was originally meant to be for “Remembrance and Reconciliation” after the U.S. Civil War. It has since become a way to honor the men and women who died in all wars. I can think of no better way to honor those real heroes on this day than for you false “heroes” to stop lying to say you’re Just Like Them. Because you’re not. Then, go in peace.

So for all of you who really served in our military: on this Memorial Day, please accept my deepest gratitude for your service, and my condolences for your fallen comrades. May we learn from our many past mistakes, and only call upon you again when truly needed.

27 Comments on “Remembrance and Reconciliation”