When I started True back in 1994, there weren’t too many people online — especially compared to now. Once I quit my Day Job to pursue online publishing full time, I was constantly looking for peers — people to talk with that would understand what it was I was doing.

It was hard going at first, but I eventually found several communities of people using email discussion lists to communicate. I joined several, and was able to find a number of interesting people to help keep me stimulated and learning new things.

One of those lists was called “Online News”, which was started by a pioneer in the field, Steve Outing, who since 1995 has written a column on online topics for the industry rag Editor & Publisher. (I still keep in touch with Steve after all these years; he has found my business model fascinating, and has written about it several times.)

It also helped that the Online News list dealt heavily with the future of newspapers in the face of “new media.” After all, I get most of the news for True — a news commentary column — from the news media, so I have personal and professional interest in its survival.

It was a good fit for me, since after all I was doing news stuff online. It even led to me being invited to speak at industry meetings, like the Online News Summit in Washington D.C. way back in 1998.

Yet They Didn’t Grasp It

The attendees at that one, which included participants from CNN, ABC, El Universal Digital, MSNBC, The Jerusalem Post, the MIT Media Lab, NANDO.net, Associated Press, UPI, Reuters New Media, AFP, The Irish Times, and many others, listened politely — and dismissed me as an anomaly; certainly few others could do such a thing with their classic journalism education! (The term “blogger” hadn’t been coined yet.)

So I started to realize that even the journalists that were savvy enough to join an online discussion list called “Online News” weren’t necessarily “getting” the amazing changes that were coming to the journalism business.

What really sealed it for me was a Washington Post editor who complained on the list that he could not find any “hotshots” to work for him. He wanted people who could write, code web pages, do Shockwave, run servers, guide online strategies, and hand-hold the old-guard reporters into the Information Age.

It’s no wonder he was having trouble finding a “hotshot”: at the time, a typical beginning reporter’s salary was about $19K a year. I told him there are plenty of “hotshots” out here, but we’re already making one hell of a lot more than $19K/year running our own publications. He didn’t reply.

I dropped off the Online News list and started my own discussion list, hand-picking people who really understood the changes coming to a world where anyone could have “the power of the press” — by publishing online.

The Online News list sadly died after Steve Outing himself moved on to become a senior editor at the Poynter Institute for Media Studies, where in addition to blogging (hah!), he conducted research on the role of the Internet in the news business, including an eyetrack study of how people interacted with news sites, which was pretty new tech at that time. I’m sure he was frustrated too, to see the list die out; it would have been useful as newspapers really started to have problems in 2007–2008.

But in 2008, someone who really wanted to see the list pick up again did what was needed: run it himself. He sent notes to people he remembered from the old list and asked us to get onboard again. I was flattered to get an invitation to the new discussion list, this time named “News Online”.

Sadly, not much had changed, attitude-wise, in the 10 years since.

Get Him! He Doesn’t Conform to Our Old Models!

Last week Paul, a journalist, wrote to the list with the subject “Chasing a Meme for Profit”:

I’m wondering if any other journalists have tried to go after an Internet meme like [this example]. Not as in a story in the main product about it, but a separate satellite site — a cash cow in the field so to speak? This [example site] may be a little racy for me even (I may “flip it” for profit…), but I’m thinking there may be other popular national memes that could be built out.

It’s not pure journalism, but it could be, I think. I’m sure someone has done something like this — where are the success stories?

Well, as it happens, I have done just that: I replied that I created a mini-site about Janet Jackson’s 2004 Super Bowl “flash” — the infamous “wardrobe malfunction” (JanetJacksonFlash.com).

I noted it made more money than what it cost me to set it up but, more importantly, it brought me more readers. It gets another surge of traffic each Super Bowl, and people still use the subscribe form there to sign up for True.

So yeah, it made money, but more important to me was finding many more readers who wanted more thoughtful journalism.

Well Not That Kind of Example!

In answering the question Paul raised, and providing an example “success story” as he requested, I sure didn’t expect to get attacked, but David, who works for Agence France Press, the French news agency, came out swinging, replying to my post:

And if I had used such methods to attract traffic to my site, I wouldn’t be boasting about it.

A world in which every individual becomes their own little capitalistic enterprise, stooping ever lower to attract vicarious attention to their own twittering and fluttering, is a world which is doomed.

And he was serious! Doomed! We’re all doooooommmmmed! Not just newspapers, but the entire world! Oh, woe to all of us! Boo hoo hoo….

So I went back and explained in more detail what I was doing with the Janet Jackson site:

I very quickly 1) proved fairly conclusively that Janet Jackson’s event — a major news story — was no accident, and 2) made fun of the event, rather than treat it seriously as most other American media did. And you think I have something to apologize for? Please. The hysteria over 2 seconds of televised boobage was ridiculous. Really: Senate hearings?!?

It’s journalism’s job to put things in perspective, and the mainstream media utterly failed in the Janet Jackson case. I’m not ashamed at standing up to say “This is stupid,” I’m proud of it. And if you were part of the media hysteria, which I would call “crap”, then I point the finger right back at you. 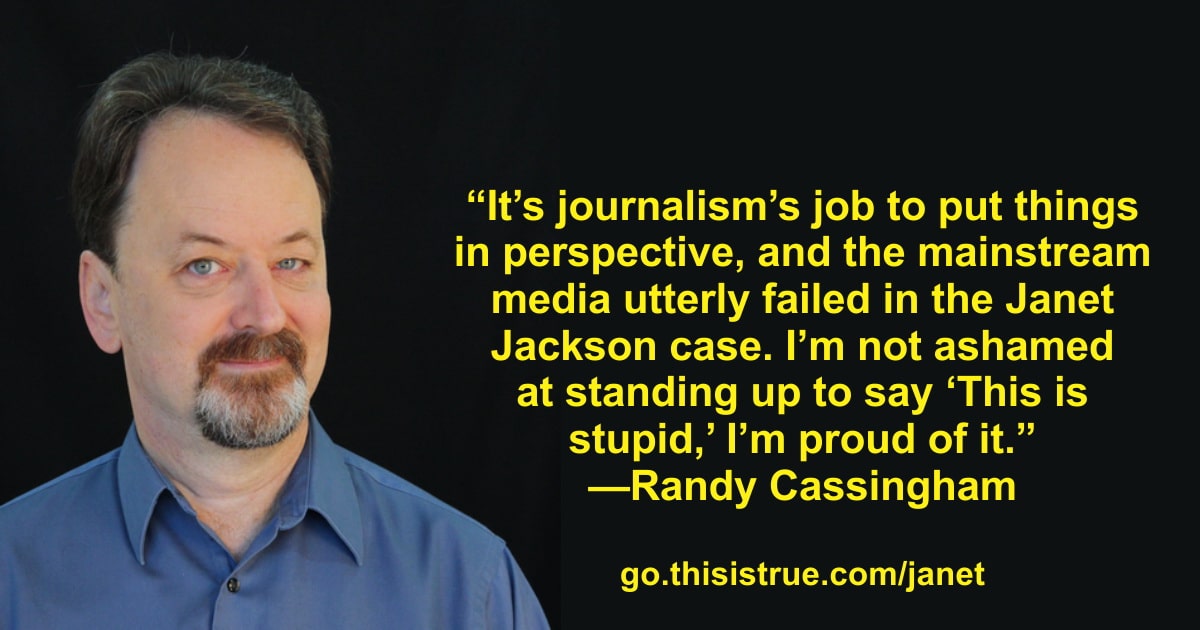 Mainstream media pandered to hysteria, while I wanted readers who pronounced the hysteria ridiculous. And that site helped me get them.

David seems to think I should be ashamed of wanting that kind of reader. Seriously?! I absolutely do want readers to think and to be critical of groupthink, and the Jackson microsite brought me just that by the hundreds, and they’re still trickling in today.

It was a perfect example of what Paul was looking for. It was well worth the small investment of time and money, which has helped my site attract readers who think, while the media that counseled hysteria has been whacked by bankruptcy.

And David just can’t see a lesson in that. Huh.

What an Example of Not Grasping It!

David claims I’m one of those who’s “stooping ever lower to attract vicarious attention to their own twittering and fluttering,” which will lead, according to David, to “a world which is doomed.”

There’s a great word to describe David’s reaction: hysteria — the same sort that was exhibited after the Janet Jackson “wardrobe malfunction.” I’m tired of mainstream media hysteria, but David indeed does have a point, even though he wasn’t able to draw it himself: the mainstream media-led world is doomed if they keep that up. Long live the new world of the intelligent, critical consumer.

But the best part? While no one on the new “News Online” list wanted to get into the fight (and David, true to form like the first clueless guy, didn’t respond), my reply brought several new subscribers — members of the News Online list itself.

Maybe there’s a bit of hope for mainstream journalism after all.

(Note: This page originally had a link to subscribe to the mailing list, but it started dying off a short time after this, and then ground to a halt — so I’ve removed it. Gosh: a mailing list of people bitterly lamenting a dying industry? How could that not make it?!)

33 Comments on “The Future of Newspapers”