In June, This is True celebrates 21 years online — a pioneer in online publishing that predates Facebook, Google, Amazon, and the vast majority of other web sites you can find online today. 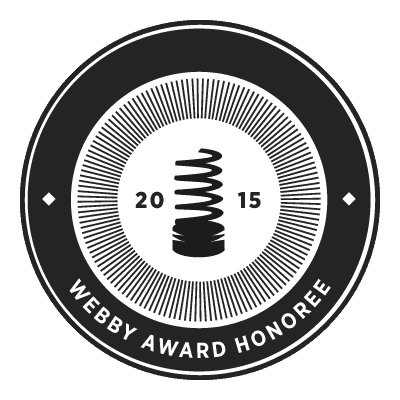 And, for that matter, the Webby Awards, given annually for excellence on the Internet by The International Academy of Digital Arts and Sciences. They started giving them in 1996, so that’s pretty long-lived, in online years — but I still beat them online by a mile. Yet they only just now came around to recognizing True — not with a nomination for an award, mind you, but as an “Official Honoree”. I lost out in the “real” nominations to such sites as the “Museum of Selfies” and “Invisible Girlfriend” (“Finally. A girlfriend your friends can believe in” …even though they make her up for you. Yep, really.) But huge respect for nominee War Ink, a documentary site for Iraq and Afghanistan war vets who tell their stories via, or accompanied by, their tattoos. Spectacular …but I’m unclear why it’s categorized as “weird.”

The Webbys’ “PR Tips” suggest that I “MAKE YOUR HONREE [sic] STATUS PART OF YOUR MARKETING STRATEGY.” How? Well, “Take out an ad in your local newspaper” — yes, really! Why, hundreds of people still read newspapers! — or “a favorite trade magazine.” Yeah, well, I’m not aware of a trade magazine for “weird” — or even for email newsletters that have profitably survived for 21 years. But hey: it’s nice to be recognized! And rather than take out ads, I’m telling you first. I’ll get around to their other suggestions, like “Dont [sic] forget to tell your friends and followers about your success. Tweet about your win using #Webbys to connect with other Honorees.” later. Much later.