In the Emergency Medical Services Biz, we don’t always find out the answer to the obvious question afterward: “What happened?” — how did it turn out? We just have to be content with doing our best in the situation at hand, turning the patient over to the hospital, and (usually silently) wishing them luck.

Sometimes we find out, and (sort of) wish we hadn’t.

Last Monday afternoon, while working on the Premium edition, my pager went off for “my” ambulance. Clearly very serious right from the start: a traffic crash. I mentally mapped the location: outside my normal response area. It was during the day and I knew the crew could handle it: the chief paramedic was rolling (and put a medical helicopter on standby until she could assess the situation and, if needed, launch it in a hurry).

As I heard the various “resources” mobilize and respond, I knew I had made the right decision to not go: for the two drivers involved they’d have more than enough personnel. Meanwhile I “translated” the radio messages for my assistant, Clare.

The nature that indicated the seriousness: “truck vs. motorcycle.” Not a fair fight to be sure: the biker is almost guaranteed to lose, but the driver of the truck could well be hurt too. “CPR in progress” came the update. If someone’s heart has stopped due to trauma — severe injury — the survival rate is almost nil. My wife, Kit, the deputy coroner, was out doing errands. I sent her a text to let her know her services would probably be needed. She replied that the coroner was on duty that day and would take the call, which was a good thing because Kit would be tied up for several hours.

“Stand down the chopper,” came the order over the radio. I translated for Clare: they don’t need the evac chopper, almost certainly because the biker was pronounced dead.

So an example of knowing the full story — “What happened?” Actually, no: it was just the beginning of the story. Because one of the hazards of living in a rural area, a small town, is that the odds of actually knowing the people involved in an incident are astronomically higher than in a metro area.

After getting the Premium issue sent to subscribers, I headed home. Kit was still out, so I got onto Facebook to see if there were any updates: many of my Facebook friends are county and city officials, and if there were any public announcements, I’d see them there fairly quickly.

The first was from a Ridgway cop friend: he simply noted that the dead man was “a local” he was grieving for. Damn. And a city official finally posted the name: Scott Mills.

Wait… Scott Mills? I know Scott: the patrol sergeant for the police department in the county seat, Ouray. THAT Scott Mills? 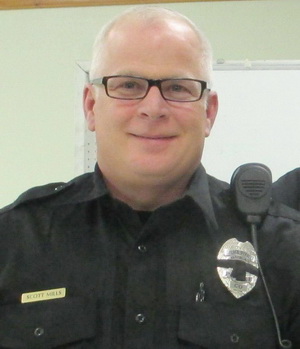 Scott was Fresh in My Mind because Kit had worked a coroner’s case with him just the night before. She had mentioned that with his long experience, she always learns things when she works a case with Scott. I had worked with him a little too; he wasn’t a friend in the sense that we socialized together, but we knew each other and worked well together.

We shared the same attribute when faced with hair-raising emergencies: almost supernatural calm. When others are getting keyed up with something crazy going on, it’s a Good Thing to have a calming force in the mix: someone to help ensure everyone stays focused to do their jobs, and to reassure the victims and family. Panic kills, so calmness really helps. And Scott is — was — even better at that than I am.

Another friend is retired from our EMS agency, and grew up here, but now winters in California. I called him so he’d find out about Scott’s death from a friend, rather than the newspaper.

“EMS is a tough business in a small town,” he said after listening to the news, and sure enough, that’s true. “It takes a heavy toll on the rescuers: psychological and emotional.”

And his conclusion surprised me: that maybe it’s too tough to handle, and he was glad to be retired. It’s true that post-traumatic stress disorder is a big risk in EMS. A Canadian non-profit estimates 22 percent of medics will be diagnosed with PTSD sometime in their careers. We think soldiers are more likely to suffer PTSD, yet their rate is “only” 5 percent. My question: and how many more will suffer without being diagnosed? (Example source)

Yet I disagree with my friend: while it’s tough to have friends die, everyone has friends die. Being a medic puts me in a special position, not a burdensome one: I consider it an honor to be there when a friend is in life or death need. I don’t have to wonder “Could something have been done?” because I was there to see that everything possible was done. Yeah, we try to fight off death, but death always wins at some point, and we have to be ready for that. And, frankly, knowing that nothing could have possibly saved Scott gives me comfort, not stress. 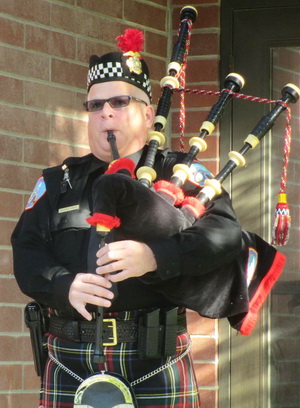 Scott played the bagpipes: he was in uniform (with a kilt) playing Amazing Grace at the memorial for another friend I wrote about: Mark Miller. I mentioned in that write-up that Mark’s wife is one of our medics. Scott was there for her, and then she was there for Scott: she was in the second ambulance that responded. And that is a small town reality too. “What goes around comes around” …very quickly sometimes. Thus, I trust there will be someone playing pipes at Scott’s service, tomorrow.

Every medic and every cop in this county knew Scott. There’s no place big enough in this county to hold everyone who will want to be at his memorial, especially when you consider that hundreds of cops will travel here to attend. So it’s been moved to the bigger city to the north that can handle the crowd.

But who will watch the store? If we all go to the funeral, what happens if there’s a need for police or EMS? That’s the beauty of the brotherhood: the next county is sending sheriff’s deputies and an ambulance to be in our county while we’re all in their county.

In the huge line of response vehicles that makes up an emergency worker’s funeral procession, the local agencies lead the line. Kit and I will be in that line tomorrow. I’ll update this post tomorrow with details of that.

We’ve all been to funerals, and I don’t think anyone would be interested in a recap of that. So instead, I thought I’d say what it’s like to be in the motorcade of a police funeral as we escorted Scott’s casket from the mortuary to the church where his memorial was held.

All of us from our county who were to be in the motorcade met at 7:00 a.m. and headed to Montrose, where there was a church big enough to handle the crowd. We stopped first and lined up by the mortuary, where the family was waiting. We had plenty of time to kill, so the EMS folks got a group photo — we don’t often wear our dress whites:

As we were from the county of the fallen officer, our group led the motorcade. Dozens of other agencies were represented, including from New Mexico (where Scott had worked as an officer for 18 years). We went the full length of the main street of town (Hwy 550/Townsend Ave.), and surely stretched for a good mile: scores of emergency vehicles with our emergency lights on, running silently. The local police held traffic at the intersections as we went through.

One thing that we all definitely noticed: so many people were standing along the road, many saluting or with their hands (or hats) over their hearts. Storekeepers and customers came out of shops to watch or salute. Some drivers stopped and got out of their cars to watch. A few even held full-sized American flags (they were ready for us, since the local news reported that the procession would come through town).

No one got in our way, or seemed impatient. That public display of respect by so many people choked me up. You can see one example early in the video: on the right side, a group of construction workers stopped their trucks and got out to show their respect, hands over hearts as we passed.

I was driving my “quick-response vehicle,” with QRVs from our EMS agency in front of me, and behind me. It was a little surreal having so many emergency vehicles following behind. I took this photo of my side mirror: 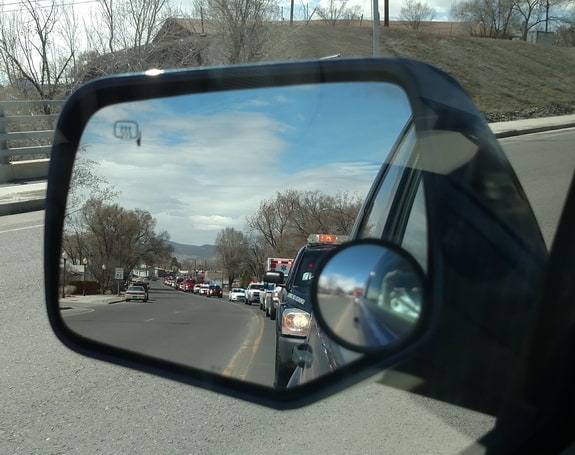 After the service, we again escorted the casket, this time to the cemetery. When we arrived, an honor guard was waiting:

The grave-side service was mercifully short: a storm was coming in, and on top of this mesa overlooking Montrose, where Scott grew up, wind gusts were up to 50 mph, yet the Honor Guard held steady with the flags in such winds!

Since Scott was a veteran, the VFW was there to give him a three-volley salute (commonly, but incorrectly, called a 21-gun salute).

And there was one last bit as we left that grabbed me so much that I took this as I pulled out:

It was an amazing honor to be part of this.

And the Last Detail

Oh, and were there any pipers, as I “trusted” there would be?

Yes: a seven-member pipe and drum corps, from as far away as Santa Fe, N.M. Thanks, guys, for showing up for Scott as he did for so many others!