A story this week is notable not just because of my offered “definition” of “Political Correctness,” but for some interesting commentary it brought. First, the story, from True’s 28 August 2006 issue:

During her lunch hour, Jane Edwards, a doctor in Sheffield, England, stopped at the Post Office to renew her daughter’s passport since the family was planning a trip to France. Nothing doing, she was told: 5-year-old Heather was wearing a sleeveless dress, and her resulting exposed skin “might prove unacceptable” if the girl went to a Muslim country. “I followed the instructions on the passport form to the letter and it was still rejected,” Edwards fumed. “It is just officialdom pandering to political correctness.” A spokesman for the U.K. Passport Service said he was not aware of any rules against girls showing skin in passport photos. (London Daily Mail) …Political Correctness: a system of thinking where it’s OK to offend someone right in front of you by enforcing a made-up rule to stop a theoretical offense to an unknown person later when you aren’t even going to be there. 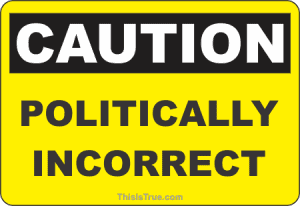 Where It Came From

The story was originally brought to my attention by Peter in the U.K. — I hadn’t spotted it myself, which is why I really appreciate reader story submissions. When he sent me the URL he wrote:

I’m humanist/agnostic going on atheist myself; but I feel that people should be able to follow their religions, as long as they don’t try to make others do so too. This seems wrong to me.

And it seems absolutely wrong to me, too.

But That’s Not the Point

I’m running Peter’s comment for a different reason: so many religious people, especially those who are not secure in their faith, tend to complain that True is “anti-religion” (or “anti-Christian”). Not so, of course; I simply feel that in addition to pointing out the foibles of cops, postal workers, love-sick (wo)men, restaurateurs, criminals (and, of course, my favorites: politicians), it’s also fair game to point out the foibles of the religious, especially those who are not walking their talk.

Here’s a guy who’s “agnostic going on atheist.” If he said something like that in, say, a high-circulation online publication, people would accuse him of being “anti-religious.” He’s nothing of the sort. Just because he rejects religion for himself doesn’t say a thing about what he thinks the rights of others should be. So much so that he’s deeply disturbed when he sees someone’s religious rights trampled. And so should we all.

Like Peter, I’m not “anti-religious,” I’m pro freedom of religion — all of it, not just the portion some people like. And that includes people like Peter, who don’t want religion forced upon them. That should not be difficult to understand, yet I’ve had to fight that battle again and again because so many are so insecure about their own faith they see any exploration of the idea as threatening. With luck, this sheds a bit more light on the subject.

This is discussed more on my religious freedom page (among other spots, up to including the spinoff Get Out of Hell Free site!)

After this was in the next newsletter, Denis in Ontario, Canada, who emigrated from the U.K., sent this thought-provoking note in reaction to the “new definition”:

I cannot remember quite how I stumbled or perhaps I was pushed into receiving your weekly offerings, some months ago, but do know I am always highly amused although somewhat saddened by the weekly fare you place before us. Ever prepared to accept the consequences of my actions and words, I have long set about deliberately upsetting members of the P.C. brigade: the Holier Than Thou promoters and all the other Bigots with which this world is seemingly filled. During my lifetime and being of an age that knows no boundaries (closing in on 80), I have seen many changes and experienced many events which only go to reinforce my thinking about some who write you — mentally challenged folks. Who else would write you with such petty, ill-thought-out and ill-considered, complaints? Deep thought, rationale and logic certainly appear to be alien to many such as these, for they are fast vanishing, as evidenced by their writings. Far too many would seem to be lacking a degree of common sense, a trait so much a rarity in today’s world.

My sole reason for writing you — I felt an obligation on my part — was to offer you my heartfelt support and thanks for the little light you throw upon the stupidities of my fellow man. Keep up the good work my Friend. I’m most honoured to have found your site and again, I am really most appreciative of my weekly portion/potion of “belly” laughs.