I’ve been telling these wacky-but-true stories weekly since 1994, and there must be a lot of them by now, right?

Each volume of the This is True book collection contains a full year’s worth of columns from This is True. Each week the newsletter has many stories, and only four or five make it into the free edition; the rest were only in the Premium edition. Not only that, but sometimes there have been extra stories that were pulled for confirmation, because I didn’t like the tagline, or other reasons. Many of those have been confirmed or improved, and restored for the books. The result: more than 500 True stories and headlines in each book! 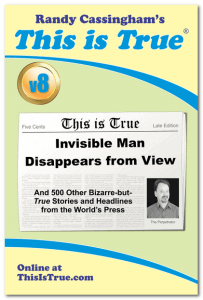 Each book’s title is a real news headline included in that volume. More volumes are coming as I have time to create them — see below for title details.

The Honorary Unsubscribe is a recurring feature in This is True. While True has weekly examples of the crazy things we humans think we can get away with — jaw-dropping stories of the human thought process, and the realization that we can do better (a lot better!) — the Honorary Unsubscribe is the “balance” to that, the opposite: stories of the absolutely coolest people you’ve ever heard about; the ones who do live a lot better by thinking.

The stories are fascinating: you won’t believe the cool people you have missed in your life. They’re not only available from Amazon in Kindle format, but also in both “mobi” and “epub” formats, as well as paperback versions.