Live From the Loo

CNN’s Live From show carried a speech by President George W. Bush live. It was a great opportunity for the show’s host, Kyra Phillips, to pop into the restroom. She was still wearing her wireless microphone, and the show’s audio technician apparently didn’t notice Phillips’ trip to the loo was carried live. “My husband is handsome,” she boasted to an unidentified stall mate, overriding the president’s words. Her brother is great too, she said, but “His wife is just a control freak.” Finally, someone alerted her that her words were going out on the air and she turned her mic off. CNN issued an apology, while Phillips went on the Late Night with David Letterman show to give her “Top 10 Excuses” for the gaffe. (AP) …No doubt her words will be remembered far longer than the president’s — at least by her sister-in-law.

Kyra Phillips: “Assholes. Yeah, I’m very lucky in that regard with my husband. My husband is handsome and he is genuinely a loving, you know, no ego [unintelligible] you know what I’m saying. Just a really passionate, compassionate great, great human being. And they exist. They do exist. They’re hard to find. Yup. But they are out there.”

Phillips: “I mean, that’s, that’s how you figure it all out, those extended visits.” [laughter]

Woman: “Yeah, but my mom, I think she really likes him.”

Woman: “Yeah, my brother’s the one that [unintelligible].”

Phillips: “Brother — of course, brothers have to be, you know, protective. Except for mine. I’ve got to be protective of him.”

Once the mic was off, Phillips’ backup jumped in:

Daryn Kagan: “All right, we’ve been listening in to President Bush as he speaks in, uh, New Orleans today. This is the one-year anniversary of Katrina making land shore there. President Bush saying if another natural disaster hits, our country. We must, uh, react better than that. Let’s listen in once again to President Bush.”

Phillips then appeared on the Late Show with David Letterman to read the “Top Ten Kyra Phillips Excuses”: 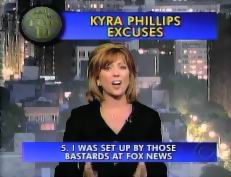 She’s got us there!

Phillips divorced that husband of hers, John Assad, in 2008. She’s now engaged to Canadian-American television journalist John Roberts — one of “those bastards at Fox News” (see #5, above).