The Degradation of Education continues. Last night, after slapping my forehead when reading a news story, I Tweeted (and “Facebooked”), “Rolling my eyes at inept news reporters: It’s ‘strong-arm robbery,’ not ‘strong armed robbery,’ which means the armed robbery was strong. Example: http://bit.ly/2U4OG69.” 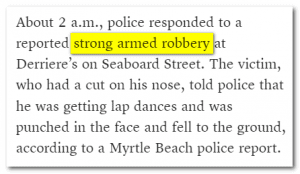 A Facebook reader commented, “That would be the ineptitude of the editors, don’tcha know….” Yes …if newspapers had enough editors to actually look over the stories before publication!

Another chimed in, “But, isn’t that what they are supposed do? Verify accuracy ‘before’ going to actual print? Cutting corners (payroll) is no excuse for missing mistakes. Even at an establishment such as this.” I replied: “Supposed to”? Sure. But have newspapers cut corners too much to actually DO it consistently? Yep — most of ’em.”

Since skimming large quantities of news articles is part of what I do as a news commentary writer, I see this kind of thing a lot …and it’s pointing to a real, and growing, problem.

Today, while researching this week’s Honorary Unsubscribe, I noticed a reporter at the Colorado Springs Gazette had identified a photo source as “US Army Aircore”. Aircore?! Maybe she means the U.S. Army Air Corps? Does she call the USMC the “Marinecore”?

This is all about playing it by ear — incorrectly. “Sounds like air core” becomes “Aircore” rather than understanding what the words really are, and what they mean. It’s not just English class, but history — and logical thought (which, I know, is rarely taught in schools. It shows.)

The Core of the Problem

I don’t know where the blame lies, but there’s probably a lot to go around. Yet teachers are overworked, with too many kids in each class. Sure “kids are lazy,” but they need to be inspired by teachers and parents …and parents are working two jobs to pay the mortgage.

Newspapers were squeezed by the Internet, and still can’t figure out how to thrive, yet owners want to keep profits up — so they fired the experienced reporters and editors to get greenhorns on the cheap, which makes news consumers lament the resulting low quality, and not want to pay for it anymore. It’s a race to the bottom. The publications refusing to play the game are few and far between.

Still, reporters want to be treated as professionals. Great: then act like professionals. Think about what you’re writing and what the words mean. Yes, we all make typos sometimes, and screw up homonyms and such. But there has never been an Aircore, in the U.S. Army or anywhere else, and it’s almost impossible to make such an error if you actually know what it is you’re talking about.

Especially in Colorado Springs, the home of the fine educational institution of the descendant of the U.S. Army Air Corps, the U.S. Air Force Academy.

Or maybe I’m just getting to be a grumpy old man? Nah: that can’t be it.

36 Comments on “The Core of the Educational Problem”