There’s a lot more to say about this week’s lead story. First, the story, from the 11 August 2019 issue:

The sign is “distasteful,” says Omaha, Neb., City Councilman Pete Festersen, but notes the business has “free speech.” The help wanted sign at Kandi’s “gentleman’s” club invites “STAY AT HOME MOM’S” [sic] to “EARN EXTRA CASH!” as strippers at the joint. “APPLY WITHIN”. (RC/KMTV Omaha) …Huh: I thought for sure they’d want them to apply without.

Yep, I went for the laugh in the tagline, in part because I couldn’t put some details into the story — though I included a photo of the sign:

If I quoted the “FULLY NUDE GIRLS!” part, everyone with a spam filter wouldn’t have received this week’s issue.

Going Beyond the Laugh

Here are some more details from the source story at KMTV in Omaha, Neb. First, here’s a direct copy/paste of how they described the sign: “It reads ‘Fully nude girls! Stay at home moms earn extra cash! Apply inside!’” KMTV says.

No. No it doesn’t. While it’s acceptable to drop the ALL UPPER CASE to the more readable mixed case, it’s definitely not acceptable for a news organization to actually change the words! While the propriety of omitting the shudder-inducing incorrect apostrophe is debatable, “Apply inside!” isn’t what the sign says, as everyone can see. It’s “Apply Within”.

Yes, it matters. Not because someone might be misled by the bad reporting, but because everyone can see what it actually says, and it brings disrepute to all of KMTV’s reporting. “What else do they get wrong? Can’t they read?!” It’s just sloppy reporting, and gives fodder to “the media is always biased and wrong” crowd. Details matter.

The station reported that “people that live and work in the area” found the sign “inappropriate,” and chose a woman named Jetta Eveland to represent them. Here’s that passage, verbatim:

“My son has seen this sign and he has asked, ‘mom why would moms go be naked? why do they want naked moms?’” Jetta Eveland explained. “The fact that it has fully nude girls, stay at home moms, my son can read that, he knows what nude means and it’s just kind of terrible.”

Leaving aside the reporter’s inability to capitalize correctly, the next point has nothing to do with the TV station, but rather the mentality of the parent who says something like this — and I see it all the time with vaguely sexual things that “might be seen” by kids, such as a nude statue at a museum: the “What do I say to my child who sees this?!!?!” panic. Very often it’s a theoretical panic: the parent saw it, and are so scared of their children asking them about it they demand that something that disturbs them be covered up …as if their children won’t “see” something else somewhere else (or, just as likely, they already have).

What these parents make clear is, they have no clue whatever about how to raise their children and instill values as they mature.

In the case of a statue at a museum, what they might “say” to such a question is, “For centuries, artists have considered the human body to be the greatest possible work of art” (adding “God’s creation” somewhere in there is optional). Or, “Your body is the only one you get, so it’s important to keep it healthy and strong.” Which takes them inward to think about what’s important.

See how easy that is?

You get the idea.

What you don’t want them to do is shy away from asking you questions just because you’re not mature enough to have the discussion — they are!

You absolutely do want them to come to you with questions that have to do with morals, values, and sexuality, because if you shy away from it and teach them not to ask, then one of two things will happen: One, they often go somewhere else to get the answers, and you may not like the point of view of other kids, porn, or wherever they go to get those answers. Or two, they’ll be much easier to manipulate by others — probably older — to do things that you would really rather not happen: child sexual exploitation, for instance, or whatever other horror you might be working hard to not imagine.

Avoiding the questions make the worst-case scenarios much more likely to actually happen.

Kids think about this stuff much more than parents know — and far earlier. Hell, I know I was fascinated by nude pictures long before my age was up to two digits, and that was in the pre-Internet days. Now, kids can easily see pretty much anything they decide to search for. And no, not letting them have a phone or Internet access doesn’t stop them, they will just go somewhere else when you’re not looking.

As usual, it comes down to thinking about this stuff. And as usual, avoiding it puts them at far higher risk than swallowing your own discomfort and being open about how you feel about whatever issue they wonder about. 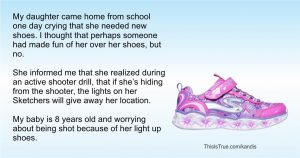 By the way: what kids really wonder about these days isn’t so much about sex, but rather how they can avoid getting shot to death at school. Really.

So if you’re really worried your kids “might see something,” what they’re already actually seeing is much more ugly than a sign (without any illustration!) advertising for “NUDE MOM’S” or a nude statue.

If you have difficulty reading the image (click to see larger), it says:

My daughter came home from school one day crying that she needed new shoes. I thought that perhaps someone had made fun of her over her shoes, but no.

She informed me that she realized during an active shooter drill, that if she’s hiding from the shooter, the lights on her Sketchers will give away her location.

My baby is 8 years old and worrying about being shot because of her light up shoes.

It’s verbatim from a Facebook post, though I couldn’t track down the original to get a date. It appears to be around a year old.