I Expect to Get a Few Complaints from lawyer readers about the lead story this week — a lot of my readers are lawyers. (I also have a relatively high number of cops and preachers in my distribution. Apparently those three professions particularly like this kind of reading.) My guess is that most of my lawyer readers are pretty decent people and doing a good job fighting for true justice, and they also find the sort of comments their colleague made to be reprehensible.

Why Lawyers Have Bad Reputations, Part 635

Police in Milan, Mich., say Stephen Humphrey, 39, and his wife, Brenda, 34, got into an argument at a bar. He got in his pickup to leave as she reached in to grab her cell phone. Her arm was caught in the seatbelt, but he kept going; her arm was torn off just below the elbow. Humphrey’s lawyer, John Gonta, decried the felony charges against his client. Because Humphrey stopped and took his wife to the hospital after the accident, “he’s a hero,” Gonta said. “He saved her life.” Gonta says Humphrey can’t remember the incident. “Not because he was drunk or incoherent, but because he was in shock,” Gonta argued. “Who wouldn’t be shocked by such a horrific thing?” Tests taken five hours after the accident showed Humphrey’s blood alcohol level was still .03 percent, plus showed a measurable amount of marijuana. In exchange for prosecutors dropping a third-offense drunk driving charge, Humphrey pleaded no contest to causing serious injury while driving with a suspended license, and driving under the influence of alcohol or drugs. He faces up to five years in prison on each charge. (Detroit Free Press, Milan News-Leader, Monroe News) …Enough time for Brenda to get a divorce. Unfortunately, she needs a lawyer for that.

Most Lawyers Would Say, probably accurately, that they are not that sort of lawyer. Yet, until legal groups with significant backbone (e.g., the American Bar Association) start to use their clout to firmly, publicly, and repeatedly repudiate such twisted statements, the general opinion of lawyers isn’t going to improve. Now, that said: do any lawyer readers want to take up the case and argue the other side?

This page asked, “Do any lawyer readers want to take up the case and argue the other side?”

I heard from virtually no lawyers, so I have to conclude that either none of my many, many lawyer readers practice in the criminal defense arena, or they fully agree, especially the part where I said “My guess is that most of my lawyer readers are pretty decent people and doing a good job fighting for true justice, and they also find the sort of comments their colleague made to be reprehensible.” (and “reprehensible” is a pretty strong word for those who make their living choosing Just The Right Word!)

What do I mean by “virtually no” lawyers? Well, I heard from no American lawyers. I did get this from Garth in Queensland, Australia:

As a lawyer, I am torn between agreeing wholeheartedly with the absurdity of the defence and supporting the need for it. Indeed, many of the finest legal ethicists in the common law world debate this very issue daily, and have done since the earliest days of British law, upon which the American system is based.

Placing the client’s interest above all else is the only way in which the law can work because the alternative — lawyers indiscriminately choosing when to defend and when not to — would undermine the entire justice system. What perhaps you don’t allow for in your thinking is the idea that the making of that defence by John Gonta probably stuck in his throat and almost choked him. We don’t know. However, he was bound by the responsibilities of his professional duty and he did that duty admirably. He did his job. It’s not always a very pleasant job.

Policeman often have to arrest and jail persons who they would personally much prefer to let run free but the law simply will not allow them to do this. It’s a great tragedy. It is easy to criticise the workings of a system but much more difficult to suggest reasonable alternatives. Are you suggesting that Gonta’s client has no right to legal representation? I’m certain you’re not. So then what? Limited legal pursuit of acquittal? How limited? To suggest that the accused should have plead guilty to the maximum offence the prosecution can charge him with is an absurdity, albeit that it is possibly the “right” thing to do (assuming of course that the prosecution doesn’t willfully charge the accused with an offence of which he could not be found guilty).

The common law isn’t always — or even often — utilitarian. It doesn’t pretend to seek to achieve the greatest good for the greatest number. In the ideal, it just seeks to ensure that every single client is given an equal right to the most vigorous possible defence. It’s not perfect but, to paraphrase the great man, it’s still the best worst system we can come up with.

Dang it, Garth: you wrote all that (and more — I cut out a bit to make it more concise), but you didn’t go into the reasons why you also wanted to agree wholeheartedly! 🙂

You’re correct that I’m not suggesting people who appear to be guilty shouldn’t be entitled to representation; let’s emphasize it: I’m not talking about lawyers making sure their client gets a fair trial; I’m talking about the absurd ways they try to get their clients off, no matter what they have to say to do it.

Rather, I’m suggesting that lawyers stick to reason, to stop short of “reprehensible” words or conduct. Even “obviously” guilty criminals (say, someone caught on film committing the crime) are entitled (another very strong word!) to a fair trial, and it’s up to their lawyer to ensure they get it. But it’s not my position that it’s a lawyer’s “duty” to get his client off “no matter what,” even though I do believe it’s significantly better for 100 guilty O.J. Simpsons to go free than for one innocent O.J. to be sent to prison. 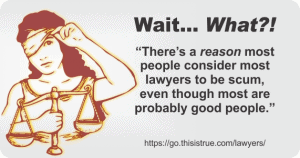 Lawyers are limited — by the law, by ethics, and by the judges in the case — in what novel theories they can propose, and no one is saying those limits are hampering defendants’ rights to fair trials. All I’m arguing is, there’s a reason most people consider most lawyers to be scum, even though (as I said) most are probably good people. And making “hero” statements like the lawyer in the story last week did add to the damage to the profession’s reputation, so why is it that legal organizations with clout don’t censure attorneys for doing that damage?

And note that I didn’t choose to start this debate on any old story, but one where the lawyer 1) did make reprehensible comments, and 2) in a case that has already been decided — the guy who ripped off his wife’s arm pled “no contest.” Rather than try to explain that myself, I’ll use the legal dictionary from law.com:

No Contest: In criminal law, a defendant’s plea in court that he/she will not contest the charge of a particular crime, also called nolo contendere. While technically not an admission of guilt for commission of the crime, the judge will treat a plea of “no contest” as such an admission and proceed to find the defendant guilty as charged. A “no contest” plea is often made in cases in which there is also a possible lawsuit for damages by a person injured by the criminal conduct (such as reckless driving, assault with a deadly weapon, aggravated assault), because it cannot be used in the civil lawsuit as an admission of fault.

At the risk of complaints by lawyers that this is too simple, I’ll summarize that: it’s effectively a guilty plea, but without an admission of guilt that can be used against the defendant in a separate lawsuit.

In other words, the defendant admitted he committed the act, even when his attorney was trying to convince the “court of public opinion” that his client was some sort of “hero” for taking his victim to the hospital after he tore off her arm. (Making “reprehensible” a clearly appropriate word here!)

I’m all for freedom of speech. I’m also for professional standards, and a small percentage of lawyers is making the entire profession look bad. So again, I think “until legal groups with significant backbone (e.g., the American Bar Association) start to use their clout to firmly, publicly, and repeatedly repudiate such twisted statements, the general opinion of lawyers isn’t going to improve.”

And it’s sad that a non-lawyer needs to lead this debate, but clearly an outside view is needed.

Humphrey was sentenced to 40 to 60 months for each count of driving with a suspended license while causing serious injury, and driving while under the influence of alcohol or drugs, which ran concurrently. He was also ordered to attend substance abuse and impulse control counseling, and his vehicle was ordered “immobilized” for three years.

In 2018, John Gonta — still an attorney in Monroe, Mich. — ran for a seat on the Monroe County Board of Commissioners. He was soundly defeated in the August primary.

31 Comments on “Sadly, This Isn’t a Lawyer Joke”