Simply put, I fully believe in the idea that “all men* are created equal” and are entitled to equal protection under the law.

*(“men” being a generic word for humans, as in “mankind” — I believe the statement equally applies to women.)

Of course, others argue against it. Let’s look at the arguments.

“Perversion!” some cry. “They’ll rape our children!” Yet the overwhelming majority of pedophiles are heterosexual, so I consider this ill-informed fear-mongering; if we wanted our children to be left alone, we should prefer they had gay teachers. As for the “perversion” of “deciding” on an “alternative lifestyle,” when did you decide to be straight? When did you choose to only be attracted to the opposite sex? I never made such a choice, and I truly don’t believe that anyone makes that “choice” either. Why would anyone choose to put him- or herself up against the majority of society like that? Simply, I don’t believe anyone really makes such a “choice” — I believe we were born the way we were born, straight or gay, and sometimes a man in a woman’s body (or vice versa). Whether you believe we are created by God or simply by nature, the only true “perversion” is trying to change that creation.

“Tradition!” many say. When I was a child, it was “tradition” to discriminate against those called “negroes” at that time. During my lifetime, dozens of states had laws prohibiting blacks and whites from marrying, too. It wasn’t until 1967 that the Supreme Court struck down “anti-miscegenation” laws. That instantly destroyed all marriages, right? Well, no, I didn’t see that happen either. If your marriage is somehow less valuable because someone else fell in love and got married (whether they are black, white, straight, or gay), that says something terrible about your marriage, and nothing about theirs. It’s not anyone’s business what you do in your marriage that doesn’t infringe on your spouse’s rights, and other marriages are not any of your business, either.

“If we allow this, then we’ll have to allow people to marry animals and children!” is fairly common too, and is another ridiculous overreaction — and was a common argument against interracial marriages. Marriage is a legal contract between consenting adults. Neither animals nor children meet that simple definition.

“Procreation!” others argue. Yet can heterosexual white people get married if they’re infertile? Of course they can. Can gay people bring up terrific, well-adjusted adopted children? Of course they can. (Will they “teach” the children to be gay? No more than their heterosexual parents “taught them” to be gay!) We don’t prohibit the elderly (beyond childbearing age) from marrying. We don’t prohibit the disabled who are unable to procreate from marrying. We don’t even prohibit prison inmates sentenced to life (or death!) from marrying. Procreation is a garbage argument. 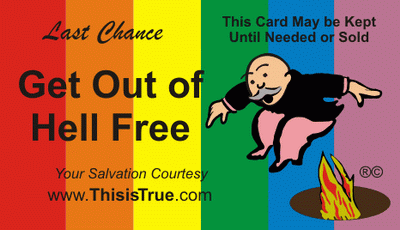 And the last vestige of the haters is, “It’s forbidden in the Bible!” Your Freedom of Religion allows you to believe this if you wish, but everyone else’s Freedom of Religion allows them not to, and it’s not up to you to force your religion of hate and inequality on others. But let’s stay with that argument for a moment. If you’re in the “it says it in the Bible” camp, that means you:

…and thus can certify you are worthy of “casting the first stone” — right? Or are you just another hypocrite according to your own beliefs? (You do know what Jesus had to say about hypocrites, yes?)

And you’re willing to swear you are worthy of this, “So Help You God” with your hand on that Bible you’re using as a weapon?

I doubt anyone qualifies.

I wouldn’t be at all surprised if the Bible was used as an argument against mixed racial marriage too.

The Kicker:
Gay Marriage is a Conservative Value

If I had any doubts about my stance, they were erased by Ted Olson. Olson’s not some liberal mouthpiece: he’s the arch-conservative lawyer who argued the Bush side in Bush v. Gore (and won), for which he was rewarded by George W. Bush with the position of Solicitor General. Olson is also a founding member of the Federalist Society, and a former member of the editorial board of The American Spectator magazine (a conservative monthly).

Here’s just some of what Olson had to say in an interview with Chris Wallace — on Fox News:

No. As a matter of fact, since 1888 the United States Supreme Court has 14 times decided and articulated that the right to marriage is a fundamental right. We’re not talking about a new right here.

We’re talking about whether a fundamental right, something that the Supreme Court has characterized as the most fundamental relationship we have in this country, can be deprived of certain individuals because of the color of their skin or because of their sexual orientation.

We do not permit discrimination, inequality. That’s why we have a 14th Amendment that guarantees equal rights to all citizens. It’s not judicial activism when judges do what the Constitution requires them to do, and they follow the precedent of previous decisions of the Supreme Court.
…
When you say “same-sex marriage,” you’re saying a particular type of marriage. The Supreme Court has looked at marriage and has said that the right to marry is a fundamental right for all citizens.
…
This is what judges are expected to do. It is not judicial activism. It is judicial responsibility in its classic sense.

But people have voted against it!

The Bill of Rights guarantees Fox News and you… the right to speak. It’s in the Constitution. And the Supreme Court has repeatedly held that the denial of our citizens of the equal rights to equal access to justice under the law is a violation of our fundamental rights.
…
All we have to do is look into the eyes of these individuals and decide why are we denying them the right to happiness that we afford to all of our other citizens.

Out of context? Judge for yourself! Here is that interview in its entirety:

Due to Youtube’s then-10-minute-limit on videos, the last 3-1/2 minutes are in a separate video:

Today, the Supreme Court started to hear arguments on this. I can’t imagine that the top court in the Land of the Free could rule that such discrimination is warranted.

Even Karl Rove, the arch-conservative Republican operative, agrees he could “imagine the [2016] presidential Republican candidate saying flat out ‘I am for gay marriage’.” Republicans could make the huge mistake of sticking to the 21st Century anti-miscegenation law. OR they can agree that ensuring equal protection under the law — the Constitutional ideal — is truly a Conservative Value.

Join me in supporting equality in marriage. It’s the American Way.

Sure Enough, on 26 June 2015 the Supreme Court went with the only rational decision. The only sad thing is, the vote was 5-4, rather than unanimous.