In This Episode: What if there was a way to use your mind to reduce stress, increase emotional health, boost your attention span, help preserve your brain as you age, even help control pain? There is a way, and it’s actually easy to do.

What if there was a way to use your mind to reduce stress, increase emotional health, boost your attention span, help preserve your brain as you age, even help control pain? There is a way, and it’s actually easy to do. 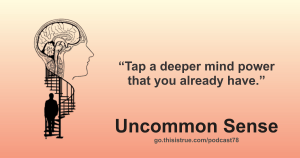 This is True is pretty much “about” thinking, but that doesn’t mean thinking has to be hard. And as I’ve already established in previous episodes, thinking doesn’t demand high intelligence. I’ve met plenty of very smart people who don’t have a lick of common sense, let alone Uncommon Sense, and I’ve met people of pretty average or less intelligence who dazzle me with their Uncommon Sense, let alone displays of common sense!

I think one of the keys that makes the difference is self awareness, because first, that helps you avoid the trap of the Dunning-Kruger Effect, discussed in Episode 41, and realize you have gaps in your knowledge (and, again, knowledge is mostly decoupled from intelligence), and it allows for the humility to be willing to gain that knowledge.

So many people are so closed-minded that they are actually afraid of using the very tool that will enable them to not only boost their brain power, but also to get all of the benefits mentioned in the introduction, and more.

Do you want to take a moment to meditate on what that tool might be?

That word — meditate — has a lot of layers of meaning. I consulted my favorite dictionary, American Heritage, to help explain.

First definition: “a) To train, calm, or empty the mind, often by achieving an altered state, as by focusing on a single object, especially as a form of religious practice in Buddhism or Hinduism.”

Sadly, too many let that last phrase stop them, rather than continuing on to get all the definitions, such as:

“b) To engage in focused thought on scriptural passages or on particular doctrines or mysteries of a religion, especially Christianity.”

And “c) To engage in devotional contemplation, especially prayer.”

Yet that’s just the first definition. But some don’t care what religion might be involved, they just don’t want any religion! For them, there’s also the second definition:

“To think or reflect, especially in a calm and deliberate manner.”

That doesn’t sound all that scary, does it?

In a more generic sense, “meditate” can also simply mean “To plan in the mind; intend” — but indeed this discussion is about the first two definitions.

What can any religious or non-religious person get from meditation? The benefits mentioned in the intro are a great start: reduce stress, increase emotional health, boost your attention span, help preserve your brain as you age, even help control pain.

But, who says so? Objective research does.

Dr. Matthew Thorpe, now of the Mayo Clinic, wrote an article for the web site Healthline outlining the “12 Science-Based Benefits of Meditation”, which I’ll link to on the Show Page. He defines meditation a bit more simply: “a habitual process of training your mind to focus and redirect your thoughts.”

He doesn’t simply say meditation “reduces stress” and move on, he talks about the studies that looked into that claim, and how they measured the reduction in stress. It’s not just asking someone who just meditated, “Hey, are you more calm and relaxed?” and checking the yes or no box.

Rather, the researchers measured the participants’ levels of the stress hormone cortisol.

Another claim is “emotional health.” What, really, does that mean? For one, decreased depression. And he not only briefly summarizes the research on studies that look into that, he links to them on sites like PubMed, which is a U.S. government site that collects research papers, primarily from the MEDLINE database on life sciences and biomedicine. It’s maintained by the U.S. National Library of Medicine at the National Institutes of Health. NIH also has a page that summarizes the research on meditation, which I’ll also link to on the Show Page.

In another article I’ll link to, the Mayo Clinic itself says that just on the topic of emotional health, the benefits of meditation can include:

That’s one heck of a list, considering that’s just one small slice of the meditation pie.

But what about physical benefits? Mayo says meditation can help with:

Notice the crossover on the mental health and physical health lists: there is a strong link between mind and body, which is how meditation can help the mind improve bodily function.

I’m not going to go through all the benefits and studies, that’s what the links on the Show Page are for, but hopefully you got the idea.

I’ve long used meditation to increase my focus, which is handy for someone with ADD. For me, ADD, or what’s more popularly known now as ADHD, is not a handicap for me, it’s a gift that allowed me to thrive at NASA and — at the same time — conceive of, execute, and be successful with creating an entirely new business sector of online feature columnist, way back in 1994. Listen to Episode 13 for that story.

My wife, who probably meditates five times as much as I do, also uses it to help her focus not just because she also has ADD, but the job title “coach” is so wide and comprehensive, she wanted to narrow down her topics more and more and more, since that helps her have a bigger impact with the people that gravitate to her. She not only loves working with people that use their ADD to be better entrepreneurs, she also is fascinated by the topic of fear: why some don’t seem to be bothered by any irrational fears, while others practically live in terror.

Successful people use coaches. Not just athletes but entrepreneurs, executives, professionals …and coaches use coaches! Kit and I are currently working with a coach who is all about planning for big futures: deciding what you want to strive for in what period of time — and then executing a plan to get there. He knows what he’s talking about: he’s been doing it intuitively since he was 9 years old, which has gotten him to the top of several business sectors, starting with being an elite athlete himself.

And he is responsible for me, as one of his current group of students, working on a big plan, sort of like how I worked out This is True itself. And part of his method is — you guessed it! — using meditation to visualize yourself reaching whatever your goal is, and how to get there.

He assigned us one specific guided meditation, and no I won’t mention who recorded it, but he’s a “name brand” in the business. And frankly, I thought his guided meditation was terrible. That’s not to say no one will get anything out of it, but I’m not exactly a proponent of what many call “woo woo” methods that are often laid on top of things that are proven to work, such as meditation.

And I pictured myself saying this to the group and having them reply with the classic challenge: “You think you can do better?”

And my answer was yes, yes I can. So I did. As a podcaster I certainly know how to produce quality audio programs. I know where to buy the sort of music I had in mind to be in the background, helping to promote focus without calling attention to itself.

I’m not planning on being a meditation guru and churning out a lot of different guided meditations, but I — and at least some others in the group — are using it instead of the name-brand guru guy’s.

Consider your declaration: the one- or two-sentence description of what you are striving to achieve over time. Bring it into your consciousness, and go over it slowly. The more specific it is, the better. If you think of a clearer way to say it, it’s OK to adjust it now.

Your declaration is not a wish: it’s a goal that you can work to achieve, even if you don’t know how yet.

If that sort of guided visualization is something you can use yourself, great: I’ll link to it on the Show Page. And if that’s not your need, think about how you can use other types of meditation to get the terrific benefits outlined at the linked articles. There’s probably a Youtube video on pretty much any topic you might want to try, and if you don’t like one approach, there are probably a dozen others to try.

The bottom line is, meditation really is a way to tap a deeper mind power that you already have. Since common sense hasn’t made it routine in our lives, it’s apparently a matter of Uncommon Sense.

The Show Page for this episode is thisistrue.com/podcast78, which not only has the links I mentioned, but also a place to comment.