I caught up this week with one of the few TV shows I’m watching — the newest Star Trek series, Enterprise.

The episode I saw this week had the ship come across a comet. A landing party went down to it, blasted out a crater, and took a core sample. (Nitpick for the producers: an 80km comet* doesn’t produce full Earth gravity! Sheesh!) 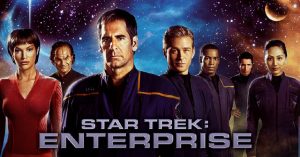 Anyway, the entire concept is so much like real life, I have to mention it: the Deep Impact Mission just passed its critical design review.

You may know I used to work at NASA’s Jet Propulsion Laboratory. Deep Impact is a JPL mission that will slam a probe into comet Tempel 1 on July 4, 2005. Mission planners expect the resulting crater will be about 90m wide and 30m deep (the comet itself is about 3km, or 1.9 miles around), yet even that impact isn’t expected to change the comet’s orbit at all**!

A spacecraft will be stationed 300 miles away and will “observe the impact, the ejected material blasted from the crater, and the structure and composition of the crater’s interior.”

Best of all, the impact will be visible from Earth, even with fairly small telescopes (and, of course, the pictures will be shown on the ‘net). Very, very cool — and considerably more interesting than the fictional concept of drilling a core sample!

When I worked at JPL, I really liked going down to the “high bay” where they build space probes. By weird coincidence, Deep Impact isn’t being built there, but instead by a contractor: Ball Aerospace in Colorado, about 5 miles away from where I now live. The project has a great web site with all sorts of details.

*When I said this in the free edition, I got lots of mail saying that size doesn’t determine gravity. Yes, I know; gravity is a function of mass, which is determined by composition and the amount of material present — which is a function of size. Bottom line: an 80km body cannot produce full Earth gravity.

**“No orbital change at all” isn’t 100% scientifically accurate, of course.

That’s close enough to “no change at all” for me.