I got a protest unsubscribe this weekend from “EJ” in California, who complained:

Just too much coming in! Also your dim view of politics shows more ignorance than knowledge. Any nitwit can bash Washington. But only close observers realize the cause of the crisis: the Tea Party and lame GOP leadership.

But thx for some chuckles.

The funny part is, I had no idea where EJ was located when I saw the complaint, and I was anticipating that “close observers” such as EJ would pin the blame directly on “the progressive left and Obamacare” (or similar).

At least for once, he (she?) wasn’t blaming me for promoting/bashing the left/right. As long-time readers know, I’m an equal opportunity basher, simply because I think it’s the two party system — both parties — that are leading the country to hell (and that’s the hell of your choice: literal or metaphorical).

I had seen a graphic “meme” on Facebook awhile back, and it came back to me after reading EJ’s whine. It shows the Democrat’s symbol, the donkey, facing left, and the Republican’s symbol, the elephant, facing right. There are two captions above those: “Clowns to the Left of Me” and “Jokers to the Right” and one at the bottom: “Here I Am, Stuck in the Middle With You.” I couldn’t find it, so I recreated it: 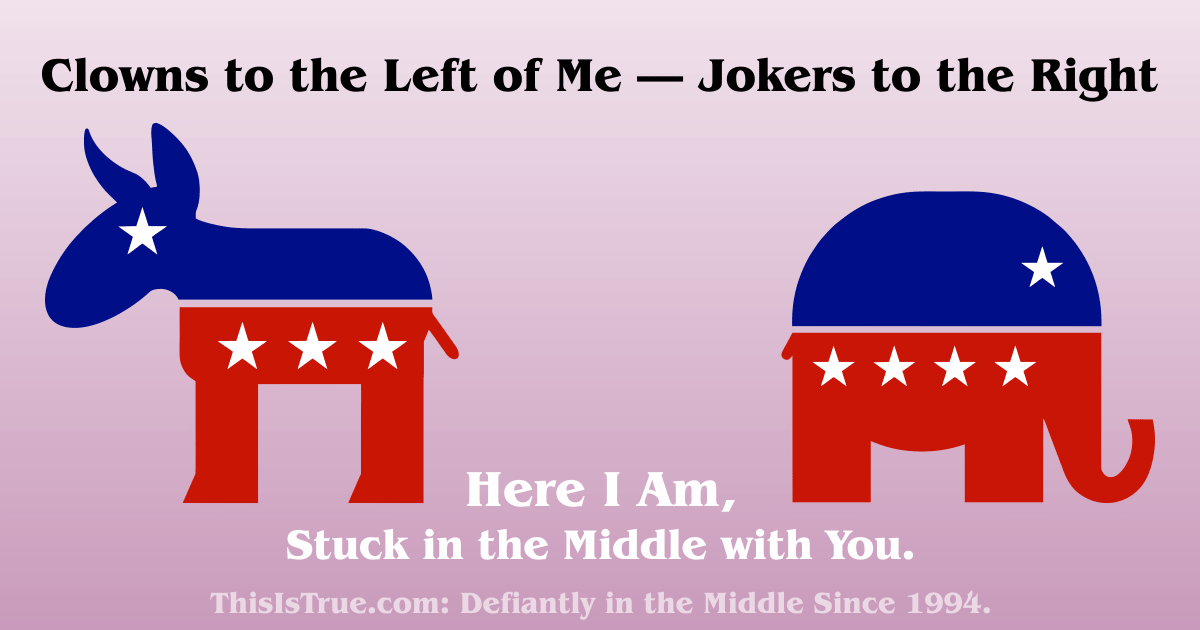 I commented, “And what do they do to us in the middle? Well, notice where their tails are, and what is emitted just below same.”

In just the first 10 minutes, the graphic was “Liked” more than 40 times, and shared more 20 times. I have little doubt that both left-leaners and right-leaners are among the readers who did. I haven’t met anyone on the right who fully approves of everything the Republicans do, and no one on the left who fully approves of the Democrats’ actions. The majority is a lot closer to the middle than either edge.

So I refuse to take EJ’s bait. I don’t fall for the notion that “the other side” is solely to blame for the constant messes we’re in. What one party’s president/Congress starts, the other continues (even after his own party has thoroughly bashed it, whether “it” is drones, spying, overreaching TSA security, or whatever else). So no, I don’t point my finger at the left or the right, I point it at Washington D.C. in its entirety. If I’m a “nitwit” for that, I’m in excellent company.

24 Comments on “Clowns to the Left of Me; Jokers to the Right”