The Dvorak keyboard is an ergonomic alternative to the layout commonly found on typewriters and computers known as “Qwerty”. The Qwerty keyboard was designed in the 1870s to accommodate the slow mechanical movement of early typewriters. When it was designed, touch typing literally hadn’t even been thought of yet. It’s hardly an efficient design for today’s use.

By contrast, the Dvorak (pronounced “duh-VOR-ack”, not like the Czech composer) keyboard was designed with emphasis on typist comfort, high productivity, and ease of learning — it’s much easier to learn! 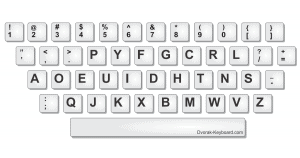 There were several variations in the Dvorak’s design in its first few decades, but these were settled when the American National Standards Institute approved a standard for the layout of the Dvorak in 1982.

There’s a lot more information — this page grew enough that it was moved to its own site. So, for more details about the Dvorak layout (it’s not a “system” any more than Qwerty is a “system”), see my Dvorak Keyboard microsite.

And yes, I use the Dvorak layout on my computer to make my writing much faster and more efficient. It’s the “secret” of my being able to produce so much material.

12 Comments on “The Dvorak Keyboard”