Hey: the priest didn’t have any problem with it. From True’s 4 December 2005 issue — just another story that simply needs to have a photo included.

Famiglia Cristiana (“Christian Family”), Italy’s leading Roman Catholic magazine, came under fire after it ran an ad for a ventilation company which showed a woman in the shower. Readers could easily see her backside through the steamed-up shower door. “If you want to see clearly,” the ad said, “call an electrician now.” The editor, the Rev. Antonio Sciortino, at first defended the ad, but decided to apologize to readers after they “made it clear” the ad upset them. (Reuters) …Hey, cut him some slack: if he’s been following his vows, the photo wasn’t something he’d be able to recognize.

Well Of Course You Want to See the Photo!

…But only for research and social commentary purposes, of course! 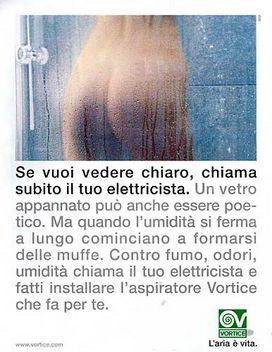