Tom in Nevada asks, “Given the amount of grief you give the well deserved Floridians, is there an disproportionate number of subscribers from Florida or maybe a disproportionately low number that might be turned off from the constant, once again well deserved, coverage of their exploits? Just curious.”

Well first, I don’t give Floridians (or, really, the Floridiot subset) grief; they bring it on themselves. As for your question, though, California has about 2x the population of Florida; California has about 3.5x the Premium subscribers of Florida. So I guess I would have to say the latter, if either one must be chosen.

Plenty to Choose From

Some subscribers in Florida complain if I don’t have a Florida story in an issue, so clearly at least some Floridians have a sense of humor! Bottom line, though, I skip a lot of Florida stories because some of them are, well, repetitive. I could probably do an All-Florida issue about once a month, if I really wanted to. Florida is, by far, the weirdest state — much more so than California, which a lot of people assume is weirdest. 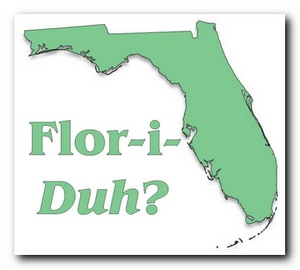 So When The Above Ran in the free edition Friday, it brought some response — but at least, not outrage! Walter in Florida was first:

Your answer is 100% correct about the Great State of Florida. I have lived here over 60 years and proud to be living in the weirdest state. Some of the great things we are noted for should not be mentioned. Especially if you live in the South Florida, Hialeah area.

But George (“in Florida with a northern accent”) complains:

Please keep in mind that not everyone who lives in Florida is a Floridiot or even a Floridian. Many of us are transplants from colder climates. I have lived here 13 years and do not consider myself to be a true Floridian (or Floridiot). During those 13 years we’ve only met about a dozen ‘native’ Floridians. If there was a way of checking, you would probably find most of the Floidiots are natives while the majority of your subscribers are transplants. Keep the stories coming.

Well first [grin], you’ll notice that I separated “Floridians” and “Floridiots” to make it clear that not all Floridians are Floridiots. But second, I think part of Florida’s weirdness is specifically due to all the imports: not just them Yankees, but also the Cubans, the Haitians (especially those who practice Vodou [aka Voodoo]), the (gasp!) Californians, and the many other cultural immigrants that make up the mélange that is the Florida population.

Weird does not equal obliviot (Florida-tinged or otherwise)! I think it’s far better to be like Walter and embrace the weirdness, rather than fight it. Fight obliviocy, sure, but when you really get down to it, we’re all weird to some extent. And if you’re not, well, that’s really weird!