It’s been forever since I’ve written a “What I’ve been reading lately” blurb. You’ll like what has been on my tablet lately. (It’s amusing that while putting this in my blog software and having to choose categories, both “Away From Work” and “True Business” seem appropriate. Read on, and you’ll understand!)

While I was too busy to pay attention, the astronaut commanding the International Space Station made space cool again. I was mostly ignoring it all, even though the Station is near and dear to my heart: way back in 1986, I was hired at NASA’s Jet Propulsion Laboratory specifically to work on the Space Station project. Sheesh: being too busy is just no good.

During his ISS mission (19 December 2012 to 13 May 2013), Hadfield was well known for using social media to spread photos, videos, and his thoughts about his experiences in space.

He gained a major following, but what really pushed him over the top was something even more cool: his son, Evan, convinced him to record a music video in space (another first), which was posted on his last day on the station: a special version of David Bowie’s Space Oddity where the astronaut lives (his son altered the lyrics — which was blessed by Bowie). If you haven’t seen it, it’s a must. And yes, that really is him singing over the incredible visuals inside the Space Station, and Earth below:

It was an immediate viral hit: as soon as he landed, a Russian crew handler told him he liked his video! As of now, it has nearly 20 million views. Hadfield didn’t just remind the world that space is cool, he reminded the world that Canadians are cool.

What This Has to Do with Reading 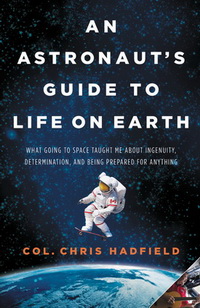 Upon his return, Hadfield announced his retirement. This fall he starts teaching at the University of Waterloo. In the meantime, he wrote a memoir: An Astronaut’s Guide to Life on Earth — What Going to Space Taught Me About Ingenuity, Determination, and Being Prepared for Anything (on Amazon here*). The cover illustration shows him space …skateboarding. Did I use the word cool yet?

He’s actually quite a good writer, and the book tells of his journey — not so much his space journey, which is of course covered too, but his life journey of how he got there in the first place.

He set the goal of being an astronaut at 9 years old, after watching Neil Armstrong walk on the moon. A goal he set even though there was no such thing as a Canadian astronaut, and there was no indication that there ever would be.

So it’s not so much about how to be an astronaut when not born in the USA or Russia, but rather how to prepare yourself for life in general (“being prepared for anything”), and what us regular people might learn from astronauts.

It’s frankly brilliant — and (hint!) a great book to give to young folks to read, like your kids or grandkids, especially if they have any interest in space or science. Highly recommended for you, too, of course, and you don’t have to be a space nerd like me to get a lot out of it: my wife loved it too. Yes, Hadfield explains how there came to be a guitar on the Space Station. He didn’t bring it with him!

Not a big reader? Then just go for the pictures: he has also published a book of his space photos, Earth, Spirit of Place: Featuring the Photographs of Chris Hadfield. The memoir is available on Kindle or on paper. If you get the photo book, I highly recommend the paper edition.

The next book on my plate is more on business: I’m now well into Write. Publish. Repeat. — The No-Luck-Required Guide to Self-Publishing Success (on Amazon here*). The “no luck” is because so-called luck isn’t the important factor in publishing success, hard work, informed by solid strategies, is — a sentiment I totally agree with.

Don’t get me wrong: I’ve been a successful independent publisher since the early 1980s; I hardly need a how-to manual. But I’ve been putting off the book publishing aspect of my business for far too long; I told you of my goal to be caught up by Christmas …of last year! There has been some progress, but not enough. Why? See “too busy,” above! Looking at my schedule, I don’t like what has piled up.

It’s not True that gets in the way, that’s my job. It’s the other stuff. You know I’m a volunteer medic; I don’t want to drop that. But there are a lot of other things: I’m chair of two non-profit boards. I’m the county’s communications guy. I run a lot of peripheral web sites, like Jumbo Joke. I have a lot of mini-features in True that make it interesting as a publication.

And… and… and! No one thing clogs up my life; all of them together do.

So it’s time to prioritize. I decided to drop Jumbo Joke, then changed my mind: that has now been assigned to my assistant to do instead [update: it was later sold].

The Honorary Unsubscribe stays; the True Tidbit of the Week goes, even though I like it. (This week’s was already written, so that’s the last one. I laughed out loud when I pasted it in and was reminded it reports a study from …Canada! I love life’s little coincidences.)

Facebook has been removed from my phone; Twitter never got on there in the first place. More decisions to follow, though it’s unlikely you will notice them.

But most importantly, I am rededicating my work to publishing and getting my books out the door. Some of that work will fall to my assistant, Clare. She has already done a bunch of work on the printed books, and there will thus “suddenly” be several volumes available soon. I told her to be ready for more tasks in the new year. She’s excited at her new challenges!

Hadfield reminded me of some of the bigger goals, and how I’ve already “prepared for” them. Then Write. Publish. Repeat. reminded me to approach my publishing as a business, not as an art, kicking me in the ass a little to move forward to meet those goals. I already have solid strategies, so I’m looking forward to learning some new tactics to get there. Together, the two books are a reminder that “what I’ve been reading lately” continually expands my world, and sometimes even takes me a little beyond the world.

The list of all This is True-related books is here.

Alas, but Clare took a year+ off, which slowed things down. And then when she returned, she got up to speed again and …left for another job. Setbacks, but still moving along, even if more slowly than I would prefer.