I Really Hate to Keep sending traffic to Facebook, since they’re eating the Internet already, but man have I been having fun there lately. Baiting the political partisans is like shooting fish in a barrel: easy and hella fun.

Don’t worry: the Democratic front-runner got her turn earlier. That meme shows Hillary with the large caption: “I DID NOT HAVE FINANCIAL RELATIONS … WITH THAT BANK.”

I’m an equal-opportunity offender, though it seems like the far-out far-right takes the bait with a lot more gusto than the far-lefties. 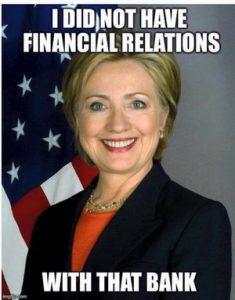 Unless you’ve already stomped away in a rage, you’re about to see why my long-stated advice (“Think first, react later — if at all.”) is such good advice!

Now, with the Trump item, even considering this morning’s comment, “Your and IDIOT!” (snerk!), my favorite is from Rhonda who wrote (and this is verbatim): “The people who put this up is not even an American citizen if this was toilet paper I would use it to wipe my dogs butt GO THRUMP from a Indian American citizen”.

Now, disregarding her ability to punctuate, I just loved her comment. I noted that (by hovering her name so basic info pops up) she is not only from Florida, but works at a high school, and no wonder kids are having such a tough time of it with role models like her.

“But,” I told her, I’ll be adopting your slogan from here on out: GO THRUMP!”

She was immediately back to deny working at a high school! She now lives in Alabama, she said, and… well, let me just quote her again: “I don’t work at a scool I’m an ex veteran who is tired of all the double talking Trump speaks his mind what the rest is thinking but to scared to say because of stepping on someones toes I know what I’m getting with Trump alittle rude but don’t sugar coat lies to get my vote I work with court house and at hospital to recover addicts my daughters dad is a school teacher in Texas Esparza is last name and he don’t like illegal Mexicans either”. I think she needs to go back to scool.

If a veteran is a person who formerly served in the armed forces, what is an “ex veteran”? But hey: GO THRUMP!

I posted a screen cap of her popup profile to show her that she had said herself that she worked at a school. “Face book did that because I would not put where I work down and there is two Rhonda Crawfords that live in brewton ala I guess that is what she does never looked at my personal page thanks for pointing that out”.

Yeah, well, Facebook doesn’t just make up places where you work and add that to your profile, but whatever. It’s 24 hours later, and it still says that. What do I know anyway? “The people” who posted the image “is not even an American citizen,” right? Because anyone who doesn’t think exactly the way she does clearly isn’t an American. Or something like that.

Still, I have a sneaking suspicion that The Donald and Hillary are tied as the Number-One recipients of the special Get Out of Hell Free card for politicians. You know, the VOID one.

The “vote” between the two memes? Even though it’s been posted longer, as of this writing the Hillary image has been shared 335 times, has 381 Likes, and 17 comments. The T(h)rump image is the clear winner, with (at this moment) 646 shares, 731 Likes, and 43 comments.