As I noted in early October, I came up with a plan to keep True going even though I’m trying to slow down a bit and work less (or, at least, work less on True!) Recently, you met the first outside writer I had hired, Jennifer Weiner. It’s time you met the second, Mike Straw. I did an interview with him over the weekend.

Get to Know Mike

Randy Cassingham: I know your Day Job employer said it was fine for you to moonlight here, as long as you don’t identify them. But can you say what you do?

Mike Straw: Heh, I guess that sounded pretty secret squirrel when I was talking to you about that, huh? I can tell you that I’m in the military. The only catch is I now have to tell you that everything I write is my own opinion, and not necessarily that of anyone I work for. But, that’s OK, because I’m a pretty opinionated person! In my career, I’ve been a computer operator, computer programmer, Force Support Officer (think Human Resource Management for the Air Force), and a college instructor.

RC: Actually, I wouldn’t want you to include any opinions of the Department of Defense, so I’m quite happy to have that be “official” on both sides!

How long have you been reading True, and do you remember how you heard of it? 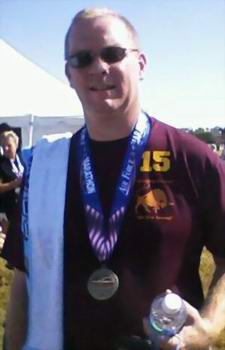 MS: I’ve been reading it for many years, but I honestly don’t remember when I first found out about True. I started out as a subscriber to the True Stella Awards newsletter, and eventually expanded out to This is True and Jumbo Joke. Now I just enjoy reading whatever I can get!

RC: Stella started in late 2002, and went on hiatus with the 2007 “awards,” so at least there’s a range for you. Have you done much writing, either on the job or on your own time?

MS: I do a lot of writing in my job, but it doesn’t tend to be as fun as writing for True. I also try my hand at other writing as I have opportunity. This month, I’m actually trying my hand at writing a 50,000 word novel as part of the National Novel Writing Month.

RC: Cool! I had a friend start out that way, and he’s written about seven of them now. How’s that going for you?

RC: Heh! What do you like about writing in general, and how will True fit in to that?

MS: Writing tends to help me solidify my thoughts. I always learn more about any subject I write about, and since I’m the kind of person who always tries to learn new things, it’s a perfect match. True is the one online product I’ve (relatively) consistently paid for, because I’m always learning new things and gaining new perspectives. So what better way to learn more than writing for it!

RC: Just so: that was one of my own attractions to True‘s format, and part of what keeps me interested. What’s your favorite kind of True story?

MS: That’s really tough since I love them all. If I had to pick one favorite type, it would probably be the Zero Tolerance stories. Some of them do really irritate me, but I think you’re doing a true service by bringing them to light.

RC: Thanks. And your least favorite?

MS: Again, hard to answer, but I guess it would be the Honorary Unsubscribe. Not because I don’t like it, but if I’m short on time when reading True, that tends to be the one I skip.

RC: I consider the H.U. a related feature, rather than a “story,” but good enough. You’ll probably appreciate it more as you get older! (You strike me as fairly young — but I guess I don’t really know!)

MS: Gee, thanks! Is it the South Park reference I put in the latest batch of stories?

Are you with the Air Force for a career, or are you looking for something new soon? If so, what?

MS: I’m actually getting close to winding down my current career. I’ve been in the military for 22 years and plan on retiring in the next couple of years. I’m actually trying to decide on what I’ll do when I grow up. I’m leaning toward teaching high school while building a long-term business venture to carry me into old age. Maybe I should start an online column?

RC: Maybe: it beats working for a living — and teaching is definitely “work” in my book! What things other than work do you enjoy?

MS: I’m an avid geocacher. If you’re not familiar with it, it’s basically a scavenger hunt with a GPS receiver. People hide containers ranging in size from the size of a pencil eraser to large ammo cans and post the geographic coordinates on a website. Then other people go out, find the containers, and sign the logs inside.

RC: I’m quite familiar with geocaching, and mention it in True from time to time, since GOOHF cards are a common prize for cachers to leave behind (small and highly valued!)

MS: I love it because it gets me outside and exploring places I would never have gone otherwise. I’ve learned things about areas that people living locally have no idea about.

Geocaching is my addiction, and I do it whenever I have a chance. In fact, if I could find a way to make money at it, I’d be doing it full time!

MS: Definitely a dog person. Dogs are just much friendlier. I can tolerate cats, but for the most part I consider them too snobbish for me.

RC: Do you have any dogs?

MS: I’ve had a few over the years. Right now I’m taking care of my daughter’s little Shih Tzu while she’s in culinary school. Or, maybe he’s taking care of me. Sometimes it’s hard to tell.

MS: Any chance of Stella coming back? I know you’ve got a lot on your plate, but I never lost my love of those articles!

RC: Once I get the new writers all set up and cranking out stories, I’ll be able to reevaluate my schedule. I hope to get it going again “soon,” but I’ve learned not to say when: I missed the last couple of dates I set.