As the manager of a gas station in Snellville, Ga., was being robbed, he was smiling, even chuckling. “Yo! Give me all the money in the [expletive] register! Right now!” the robber had ordered. “The manager was laughing at the time he was putting the money in the bag because he was looking at me over the guy who was robbing him,” said Snellville Police Lt. B.W. Brown, who was standing right behind the robber — in uniform. And it’s not like the robber hadn’t seen him: a few minutes before, the robber had asked the officer for a ride; his fully marked patrol car was parked right out front. The officer had declined to be his taxi. Once the manager handed over a bag of money, Brown put his hand on the robber’s shoulder and arrested him, and then “everyone in the store started laughing,” he said. Stephen Frankie Daniel, 21, was charged with robbery. (RC/Atlanta Journal-Constitution) ...Yo! I didn’t want a “taxi.” I wanted a [expletive] getaway driver! Right now!
Original Publication Date: 09 October 2011
This story is in True’s book collections, in Volume 18.

Previous: Caught Red-Pawed
Next: In the U.S., Kids Win a Chance to Meet “Barney” 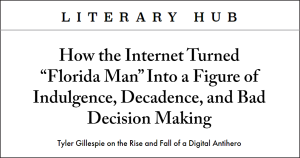