Readers have really loved my “Get Out of Hell Free” cards. They’re even featured in the current (October) issue of Playboy — one of their editors saw them, liked them, and asked if they could write about them. Well yeah!

Meanwhile, a few readers wondered if I’d have a problem with Hasbro (which owns the Monopoly board game); I pointed them to a page on my site that talks about parody, and what’s allowed under copyright and case law.

That fairly detailed explanation of parody, however, wasn’t enough for Hasbro: I heard from their lawyers last week demanding I “cease and desist” from offering the cards. My reply did not require that they have one of the cards to counter my curse, but I was tempted. 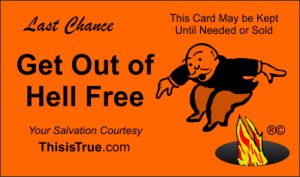 Their letter details two main complaints: first, that my GOOHF parody card “creat[es] a likelihood of confusion with respect to Hasbro’s authorization or sponsorship of or association with your commercial activities.”

Uh huh. I highly doubt anyone thinks that Hasbro “authorized” or “sponsored” my parody of Monopoly!

I mean really: do judges really buy arguments like that? But, OK, perhaps that needs to be made clear, since there are some pretty dense people out there. So I’ve added a disclaimer to the caption of the card’s photo on my web site:

Note: This product is not affiliated with, nor authorized, endorsed or licensed in any way, by Hasbro Corp, its affiliates or subsidiaries. It is a parody. 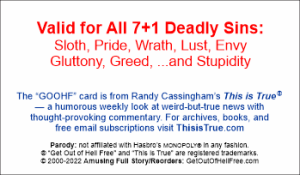 A similar disclaimer has been added to the card design (click to see larger).

I think everyone already sees that the cards are obviously a parody of Monopoly itself, but maybe not in as much detail as has gone through my own head. So let’s make that ridiculously clear too.

I mean, why a parody of the Monopoly card, as opposed to something else? Monopoly simulates the world of business — you win by making big bucks and bankrupting your opponents. You can get into “big trouble” while playing, like being sent to jail (sent directly to jail, without passing “Go” and without collecting $200)! That’s pretty “bad,” yet you can get out of jail immediately, for “free,” if you’re lucky enough to have in your possession a “Get Out of Jail Free” card.

But life is not as simple as what’s portrayed in the game: going to hell has to be the ultimate in “getting in trouble.” Unlike in the board game, money can’t buy you out of hell. My “Get Out of Hell Free” card’s intent is to mock the triviality of the Monopoly “Get Out of Jail Free” card — just as in the board game, if you’re in big trouble (and, according to certain humorless readers, the ultimate in “trouble” for me is hell!), you just slap down a card and waltz merrily away, leaving your opponent befuddled.

Obviously, no one thinks an orange parody card will really keep them from going to hell, should that be part of their beliefs, but people do get the joke: no matter whether your trouble is being sent to a board-game jail or hypocrites are telling you you’re going to hell for your “moral bankruptcy” (i.e., not believing the exact same thing they do), having the right card will set you free.

I’m sorry to have to insult my readers’ intelligence by spelling that out, but nothing is “obvious” when it comes to the law. So, I guess I better add: “MONOPOLY is a registered trademark of Hasbro, Inc.”

I Will Defy the Demand

I intend to keep offering the “Get Out of Hell Free” cards to my readers. Not only do I believe that the audience that I offer the cards to is smart enough to understand it’s a parody without thinking I am somehow an official spokesman for Hasbro, I think the average person would, too.

So not only am I going to defy their demand, I’m here to announce there’s a new GOOHF product available: credit-card-like plastic cards.

So, is this the end of Hasbro’s complaints? Their lawyers outlined their main concerns, and even before my lawyer has had a chance to reply to their letter I had updated my web site to address those concerns, and have sent an email to all my readers making those two issues clear.

My lawyer says that if this went to trial, he thinks I would win. But, he cautions, they have more money than I do, and I’m likely to run out of cash fighting this before they would. And for what? A product that I’m selling for no profit? As he knows, that’s unlikely. (I only hire the best lawyers! 😉 )

So who knows what’s going to happen next? I’m certainly not the first person that a big amusement company has bullied, even when that big company was wrong and the little guy was right. And very often, the big company is able to shut the little guy up, thanks to huge stockpiles of money.

Meanwhile, I will mention that I am not calling for any sort of boycott of Hasbro products, or asking for any kind of letter (or email) campaign against them, especially at this point; their concerns, though silly in most people’s eyes, pretty much require that they complain to me in order to protect their rights. I understand that, which is why I have already taken quick action to address their concerns.

Hasbro let it go, and I couldn’t help but wonder if they were afraid I’d call for a boycott right before Christmas — as I recall, 2000 was a bad year for Hasbro already, and I think I could have gotten good publicity for such a boycott. Meanwhile, I have since sold over two million cards!