When This is True brings you greetings, we don’t think small, we bring you the world! In this case, the planet Mars. (Yes, I know Venus is the goddess of love, but this is more up the Current Events alley, OK?) 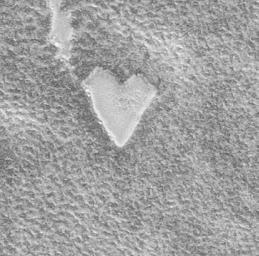 This photo from Mars (courtesy NASA/Jet Propulsion Laboratory’s Mars Global Surveyor) just might be a holiday greeting from “The Face on Mars”. Or maybe not — the official NASA caption reads:

Happy St. Valentine’s Day from the Red Planet! The Mars Global Surveyor‘s Mars Orbiter Camera captured this unique view of a bright, heart-shaped mesa in the south polar region on November 26, 1999. This feature is located in the Promethei Rupes region near 79.6°S, 298.3°W. Sunlight illuminates the scene from the lower left. The heart is about 255 meters (279 yards) across. The presence of this mesa indicates that the darker, rough terrain that surrounds it was once covered by a layer of the bright material. (Photo Credit: NASA/JPL/Malin Space Science Systems)

Who says scientists have no sense of humor?!

Earlier in 1999, the Surveyor saw another valentine heart, but instead of a mesa, the feature was expressed as a pit: 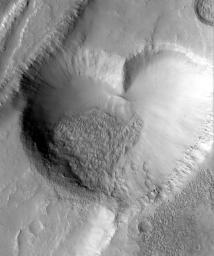 First, Mars seemed to be greeting Mars Global Surveyor with a Happy Face. Now, it seems as if the planet is sending its love with the latest picture from MGS’s Mars Orbiter Camera. This valentine from Mars is actually a pit formed by collapse within a straight-walled trough known in geological terms as a graben. Graben are formed along fault lines by expansion of the bedrock terrain. The heart-shaped pit is about 2.3 kilometers (1.4 miles) at its widest. The image was targeted by the MOC team in order to examine the relationship between a lava flow and the graben, and pits that disrupted and cut across the flow. The graben, pit, and lava flow are located on the east flank of the Alba Patera volcano in northern Tharsis. The image is illuminated from the left. (Photo Credit: NASA/JPL/Malin Space Science Systems)

Happy Valentine’s Day from This is True — and Mars!

2 Comments on “Valentine’s Greetings from Mars”