Wow: what an incredible response to the last issue. There were kudos for being able to write an issue at all, kudos for staying on schedule, and overwhelming support for my American Taliban story.

Yes, there have been a couple of complaints about it, as I expected, including one today about how the reader is tired of my “regular attacks on Chrisitanity [sic],” so I need to make something clear: I do not attack Christianity, I attack the stupid rantings of some Christians — just as I attack the stupidity of some lawyers, politicians, school officials, and cops.

I often get letters complaining when I “attack” religious stupidity, but I rarely get them from cops when (say) I “attack” something stupid a cop does. I’m often called “anti-Christian” but not “anti-cop.” Why do you suppose that is?

I am way behind on email. I was already a bit behind before the …uh… stuff hit the fan on September 11. Then I took several days off to work in Denver’s Red Cross shelter for stranded travelers. And then, if things weren’t stressed enough, I took some more time for a personal reason:

I got married on September 21.

The events of September 11 affected us all in different ways. For us, it was significant introspection. September 17th, we decided that as we proceed into an even more uncertain future, we should face it together as husband and wife.

We married at Brainard Lake in the mountains above Boulder with our good friends Tom and Amy as our witnesses. As allowed in Colorado, we officiated at our own marriage ceremony. 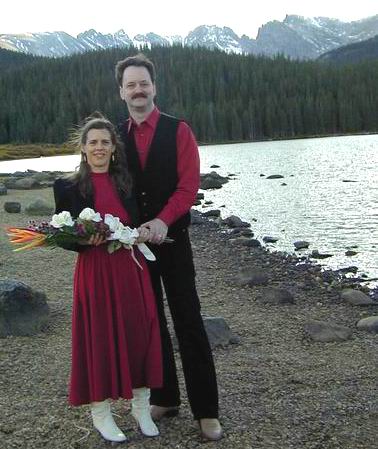