I’ve recommended Dell computers for many years. But my confidence in them was shaken when I got a new laptop in Fall 2004, and I ended up in “Dell Hell”. This is the story: ridiculous, but even somewhat funny.

As you might expect, I run my computers pretty hard since I work 10-14 hours/day, seven days a week to bring you True and other stuff, so I get a new one every three years or so. This time I decided to switch to a full-time laptop; I gave my desktop to my new assistant and ordered up a new Dell Inspiron laptop.

After finally getting it all set up the way I wanted, all was well for a few days until I came into the office, pushed the power button to get started …and nothing happened. It was the Tuesday before I was to leave the country — early the next Monday.

“No problem,” I thought: the one time I needed service Dell was there for me, and I did pay extra to upgrade my service contract on the laptop. 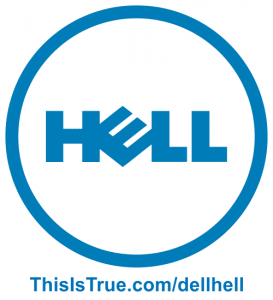 After spending the requisite hold time and doing everything the tech asked me to, including taking the computer half-way apart, he declared what was obvious to me from the start: a tech would have to come out to fix it. And there began my trip into Dell Hell.

I told him time was short as I was leaving the country. He assured me the tech would call by noon the next day and make an appointment to come out. I was relieved; I canceled a few appointments so I could be home, but by 3:00 or so the next afternoon it was pretty obvious that no one would call.

I got back on the phone and back into the hold queue. I was finally told there was no way a tech could get to my house that day — and there never was a chance of it. I asked to talk to a supervisor; I needed to get the thing fixed! The customer service rep promised a supervisor would call back the same day.

My wife was dubious: call customer service, she said. I did …and was told there was an “issue” with the motherboard of my computer; replacements were not available. Uh oh. I again asked for a supervisor, and was again told I could expect a return call the same day.

Clearly a Lemon, But…

Good for them: both supervisors actually called back that evening. But a funny thing had happened in the meantime: a courier arrived with replacement parts.

“Huh?” the first supervisor said: his system didn’t show that any parts had ever been shipped to me! Great system you have there, guys.

“What’s in the box?” he asked. Hell, I don’t know. I opened up the box and tried to describe each part to him, but one thing became apparent: no motherboard. He told me that the first tech had given me an “unrealistic expectation” by saying that a tech would arrive the next day. I emphasized that I needed it fixed by the weekend since I was leaving the country.

When the second supervisor called and I told him the story, he declared I was absolutely not given an “unrealistic expectation,” I should have had a tech the next day …except that there was this “issue” with the motherboards.

Great: does that mean I have a lemon? Oh no, he assured me; it’s just that replacement motherboards were late coming from the overseas factory. He said it was unlikely that I’d get my computer fixed before I left on my trip, and apologized.

*sigh* I at least got the number of the actual tech that would be coming out. (Addendum: very shortly after this Dell retired the model number system I had, even though it was only a few months old. My guess: it really is a problem model; why else would they dump it so fast?)

Because of the out-of-stock motherboard issue, I ended up having to do my overseas travel with my old, slow, backup laptop. When I got back the motherboard was here waiting, so I called the local tech. He said sorry, but while I was out of the country my service ticket had expired and I’d have to call the service company back to reactivate it.

After three days of voice mail jail with them, I gritted my teeth and called Dell again, wading through their menus and waiting on hold. The customer service rep said yes, the ticket was expired. Could they just reactivate it? Nope! Their solution: start all over with tech support!

No, I said, I’m just not going to go through all of that again. Surely a supervisor can simply get the old one reactivated, or at least copy the notes over to a new ticket. A supervisor will call you back “today,” I was told. That was November 3. No supervisor ever called.

What they did is discussed in the update section below, but first just a few of the horror stories readers told me after reading mine.

You can no doubt find a horror story for every manufacturer. The question becomes, then, does Dell have more than its share? Which is to say, is their customer and technical support worse than “average”? Some of my readers definitely think so! Their comments are in the Comments area below; I’ve since turned off Comments for this page for reasons I’ll discuss below.

In my first discussion of this issue in the newsletter, I mentioned that DellHell.com was already registered …to Dell (no site there, though). That wasn’t meant to imply I’m interested in starting a web site like that. This page will be plenty, thanks.

As noted in the Horror Stories in the Comments, you can certainly find horror stories about every manufacturer; no one gets it 100 percent right 100 percent of the time. The problem is, you shouldn’t have to have a newsletter with a six-figure audience to get attention. It worked for me, but not everyone has such a resource.

So yes, first of all, publishing my mini-rant in This is True did get some attention from Dell. Two Dell execs called and apologized profusely, and I gave one the other’s name so they could coordinate their efforts.

Dell says they try very hard to satisfy customers with problems that haven’t been solved by tech support. The hard part is finding out who is having problems. They said they actually have employees who surf online forums looking for horror stories, and then contact the person and help them. And, apparently, they have the authority to actually help.

Tip to Dell: if you want to get horror stories, how about activating a site at DellHell.com to solicit them? Yeah, some will be from cranks who will never be satisfied, but maybe you’ll find out that you’ve sic’d a collection agency on someone who returned every part you sent to them!

I asked one of the execs what people who don’t have a six-figure circulation newsletter should do when they’re not getting help on a big problem. The reply: Dell is working on a better process to help escalate the biggest problems to someone with authority to intervene — but it doesn’t exist yet.

Kudos to them for being honest about that, but it’s sad they got too large too fast to have that in place already. I asked him if he could fix some of the worst problems shown on this page, and he agreed to look into them personally.

As for me, he promised to replace my computer and “do what it took to make me happy.” Is it because I have a large publication, or because someone with authority heard me scream? My guess: a little of both. I’ve shipped back the bad system and his assistant walked the order for a replacement through the system. The replacement system is far, far better than the old one, and has led me to a number of Lessons Learned that you can use to help you next time you order a system.

One Commenter was astounded by what a “senior” Dell rep told him: “our problems were due to the fact that we bought a laptop that was not designed for everyday use, and if we had bought a more expensive model, our everyday use would not have caused such problems.”

One would think that any decent computer would be fine being run 24×7, but perhaps for truly heavy use it’s good advice. Dell has three lines of laptops: the Inspiron, which is essentially the consumer model, the Latitude, which is for business use (and the model line Dell employees are issued), and the Precision, which are scientific workstation-level machines.

Dell agreed to take back my Inspiron 5150 even though it was past the 21-day return period by the time they heard me screaming. I replaced it with the same model their employees use: the Latitude D600.

What Should YOU Do If You’re in Dell Hell

If you have a terrible, ongoing problem with a Dell computer, I hope you have a gigantic-circulation online newsletter: you saw what worked for me. Since few have that option, my realistic suggestion is, first, be sure you have really exhausted the regular chain of complaint — tech support and customer service.

If that doesn’t work, keep complaining. Go to the top: write a clear summary of the problem and send it to the corporate headquarters, addressing Michael Dell himself. I’ve put his address at the top of the page.

Will he read your letter? Heck no. But he has people to read — and act on — such complaints. If you can finally get your complaint heard by the right person, they will quite likely help you.

That, at least, is what I’ve been assured by more than one senior Dell executive, and I think they’re telling the truth. The same sort of procedure will probably be reasonably effective with any company which respects its customers — IBM, HP, Apple, and most of the others. But I wouldn’t hold my breath when dealing with the bottom-feeding companies that only sell through discount stores….

Though comments have been turned off after deleting scores of them, with ALL CAPS, run-on sentences, and other signs of retarded development. I’ve only left the original horror stories and the last comment — practically the only intelligent one of the later bunch. The rest were simply not worth reading, and my “rule” is that if a comment doesn’t actually add to the concept being discussed, it’s not included on the page.

Related Page: Dell Hell and Dumb People or, just how incredibly stupid can people be? Very!