While doing my research this week, I stumbled across an interesting tidbit: Paramount Pictures has become the first major film studio to announce that it will no longer be distributing movies on film, and is going exclusively to digital distribution.

Only 8 percent of theaters in the U.S. have held back on converting to digital, so this will put some added pressure on them. Paramount says Anchorman 2 will be the last of its features to be available to theaters on 35mm film stock. Other studios are expected to quickly follow suit.

I once had planned to be a scriptwriter. When I was 5 years old, my dad’s best friend had moved to Los Angeles, where we lived, to become a movie producer. My first inclination was to sit right down and write a script for him: I started on it without having any idea what a movie script looked like, but I somehow knew that a script was the first step in the movie-making process.

Screenwriting came back in a serious way in the late 1980s when, during a lull in my job at NASA’s Jet Propulsion Laboratory, I wrote a couple of spec scripts for Star Trek: the Next Generation, which was produced by Paramount. I had managed to secure an agent, even though agents hate spec scripts, and aren’t at all interested in untested TV writers. But he humored me, and duly submitted the first script to the “Star Trek Office” at Paramount.

It was rejected without comment — I had forgotten that a previous episode had used a Monster of the Week that was very similar to what I had come up with, so it was clearly too derivative for them to even think about making it (but it had an if-I-may-say-so fantastic subplot that looked into the past of Guinan, Whoopi Goldberg’s bartender character, that I’m sure she would have loved doing). 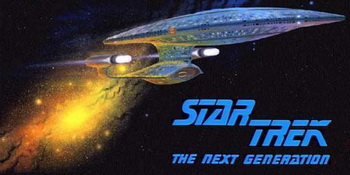 But by then the second script was ready to go, and it was much better received by the show. It was an exploration into the nature of a person’s very soul, and even though they liked it, they didn’t want to make the story because it didn’t feature any of the series’ main characters. But it couldn’t be done without using a guest star, because the character necessarily had to die in the end — his soul had been destroyed. Still, they were intrigued enough by it that I was invited to Paramount to pitch story ideas directly to ST:TNG executive producer Michael Piller.

When I arrived at the Star Trek Office, though, I had a sense of foreboding: I could only describe the atmosphere there as “anti-creative,” and I decided almost immediately upon arrival that I didn’t want to work on the show. The feeling was mutual: I still went ahead with my pitches, but not surprisingly they bombed, and I wasn’t invited back.

By then my agent was impressed enough by their interest that he again suggested I concentrate on writing feature films — that’s where the opportunities were, he said — and, still being in the Star Trek mindset, I came up with what I thought was a fantastic idea for the next film in the series: how about a Vulcan who embraced his emotions, rather than rejecting them, so that he could live the most fulfilling life possible?

As I pondered how to develop that, fleshing out story ideas in my mind, Paramount announced Star Trek V: The Final Frontier — featuring Sybok, Spock’s very emotional (sigh!) half brother who figured he had discovered the secret to finding God. As with everyone else who thinks that, he was wrong — and I threw up my hands and gave up on Star Trek, rededicating myself to my JPL work …until I came up with the idea for This is True.

Almost 20 years into True’s run, I wouldn’t have it any other way, and it was possible to do it because I didn’t want to work for a creativity-sucking media giant. But at least they are innovative enough to lead the way out of film, and who knows what that will start? It may be the end of an era, but that sometimes begets a new, even more exciting era, just like the end of one dream might allow you to dream up something entirely new.

9 Comments on “End of One Era, Start of Another”