Less spam? For the first time ever (in my experience, at least), I’m getting noticeably less spam. My spam load — the vast majority of which my server catches for me and reports in a nightly email — is down to a “mere” 350 to 450/day!

That sounds like a lot (and it is), but it’s about half of what was coming in just weeks ago. What do I attribute this to? Well, last month police in Spain raided a spam scam operation in Malaga …and arrested 310 people in the operation!

A few days later, Vardan Kushnir, who was described as Russia’s “most prolific spammer,” was found in his home — beaten to death.

It’s unclear whether some spam victim tracked him down and said “take me off your list, please” with a baseball bat, or what. It frankly amazes me that this is only the second “spammer murdered” story I’ve ever heard. 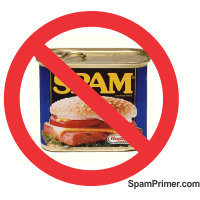 The first was several years ago, and involved a spammer shot in the head “execution style.” That one was in Russia too. Russians seem to know how to deal with those who don’t just break the law, but thumb their noses at their victims in the process.

I’ve been using this space to talk about spam, how “they” got your address, and what to do about it, for several years. The culmination of it all has been moved to a helpful microsite — my Spam Primer — but I don’t advocate murder there, no matter how tempted any of us are by the notion.

Naturally, the dip in spam volume was short-lived — except in Russia, there’s so little official punishment involved that other spammers rushed in to fill the vacuum. Spam is now more than 90 percent of all email traffic.

2 Comments on “How to Deal With Spammers”