An official spokeswoman from PETA headquarters responded to the PETA page, which contains my story, a brief editorial, and some interaction with readers.

The response is specifically replying to that page, not simply the story itself, yet she didn’t really address the most important points that were brought up on that page. My response follows their reply, which is presented unedited and in its entirety:

The two individuals mentioned in your editorial The Truth About PETA, (7/17/05) are compassionate people. Ms. Hinkle has helped countless animals, delivering free houses to dogs left out in the cold without shelter, providing free veterinary care, and even helping to build the first cat shelter in Bertie County, N.C.

PETA has no magic wand to place the droves of unwanted animals in loving homes. But we have prevented suffering by providing euthanasia services because before we did so, animals were shot with a .22, gassed in a windowless metal box, and injected with a paralytic agent that left them to suffocate, fully conscious as their organs seized up. We have also found homes for many animals, sterilized others free of charge, cleaned the shelters, sent wardens to training programs, and worked with local veterinarians. At the same time, we have pressed the counties to implement a spay/neuter program and an adoption program, to open during evening hours, and more, but so far this has not happened.

Please, if you would like to help stop animal killings, stay away from pet shops, adopt from your local shelter, spay or neuter, and never abandon animals when they become inconvenient. Readers can visit HelpingAnimals.com to learn how else to help.

The “PETA page” already addressed the issue of animal overpopulation. On that page, which PETA apparently reviewed, I said: “Yes, we definitely do have a pet overpopulation problem…. Still, what does this have to do with PETA taking in animals from shelters with the promise that they’ll be giving them good homes, but then killing them in the back of the pick-up van without making any attempt to make good their promise?

And what, exactly, is the justification for dumping these animals in the trash? And how is it that PETA kills such a high percentage of the animals entrusted to its care when the closest SPCA shelter to PETA’s headquarters is able to find good homes for most of its animals?” 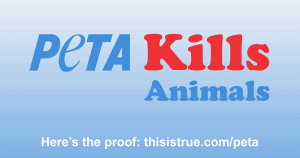 I asked Daphna Nachminovitch if she’d please address those questions before I published her letter. You guessed it: I waited several days, but there was no reply.*

She does conclude with good advice: adopt from your local shelter, spay or neuter, and never abandon animals when they become inconvenient.

Sadly, PETA doesn’t even follow its own advice, preferring to kill animals rather than attempt to find them good homes, and then secretly dumping the bodies in someone else’s trash when the pileup of dead puppies becomes “inconvenient.”

Again: shame on PETA for daring to lecture anyone on what is the “ethical” treatment of animals! Read again the PETA page and their official response and decide for yourself: do you really want to support this organization?

Good for them. Ms. Nachminovitch asked if I’d replace the letter above with a new one, but as many thousands of my readers have already read the above, I don’t think it’s reasonable to make huge changes to it. I’m thus publishing verbatim several paragraphs she added in her second letter:

A terrible mistake was made with the dead bodies, but no secret was made of the fact that PETA euthanizes animals and that the animals retrieved from the pounds would be provided with a humane death. In fact, it was I who met and spoke with officials, and not one of them ever even asked me about adoption. The pounds don’t have an adoption program, an adoption rate, or even open hours, and never have. The animals PETA was picking up as a service to the counties were slated to die. Badly. Before PETA stepped in, the animals in Bertie County were shot and gassed in this rusty, windowless gas box: http://www.HelpingAnimals.com/photos/nc/600-Bertie07.jpg [note: link removed since it went inactive; “HelpingAnimals.com” is a PETA web site. -rc]; in Windsor, animals were shot; and in Northampton County, animals were gassed in a cinderblock cell (the use of which has been resumed due to the media frenzy that followed this incident) and injected with a paralytic agent that left them to suffocate, fully conscious as their organs seized up. Photos of these facilities can be seen at http://www.HelpingAnimals.com/f-nc.asp [ditto the above. -rc]. Most people don’t realize such pounds and gas chambers even exist in this day and age.

You compare apples and oranges when you cite the Norfolk SPCA’s (NSPCA’s) adoption rate. The NSPCA is a small private organization that does not take in animals it deems unadoptable or animals it has no room to house (please see http://wtkr.com/Global/story.asp?S=3697414&nav=0oa7d5sL [again link removed: 404] for a recent news story on this situation). Animals not accepted by limited admission shelters are then taken in by shelters that are forced to euthanize, or, in many cases, are abandoned on the street (http://www.pet-abuse.com/cases/2671/ [ditto: site shut down. -rc]), or even abused by the frustrated people who no longer want them (http://www.thederrick.com/stories/06302005-4014.shtml [ditto: site shut down. -rc]).

We have also found homes for many animals, sterilized others free of charge, cleaned the shelters, sent wardens to training programs, and worked with local veterinarians. At the same time, we have pressed the counties to implement a spay/neuter program and an adoption program, to have open hours, and more, but so far this has not happened. Until this incident, no one seemed to care at all what happened to homeless animals in these areas.

While this still doesn’t address most of my questions, I appreciate that PETA made any attempt at reply.

As I said on the PETA page: “Do I think PETA is 100 percent evil? Absolutely not…. Some of what they do is great.”

I disagree with a lot of what they do, but that doesn’t mean they don’t do anything good. They do, but it seems that most of their budget goes toward what actual animal lovers would consider good use.

Meanwhile, I chose not to run the many letters from readers who complained about various other PETA actions. This isn’t intended to be a clearing house of all the “he said, she saids” about PETA; again, it’s to provoke thought and dialogue about a very specific and apparently representative issue.

The Bottom Line: PETA doesn’t do what a lot of its supporters thinks it does, and you should know the truth. If you want to know more, use your favorite search engine. There’s plenty out there on both sides.