The U.S. has its Janet Jackson scandal; Canada has a scandal over a completely clothed woman with a modest neckline. And naturally, we have the photos to illustrate this earth-shattering story from True’s 21 August 2005 issue:

Eek! It’s the End of the World!

“I don’t see the sporting necessity of having Maria Sharapova’s breasts falling out of her top,” says Prof. Richard Powers, who teaches sports marketing at Canada’s University of Toronto. “Boy, oh, boy, what are they selling here?” he asks, commenting on a banner-sized photo of 18-year-old tennis star Sharapova created by Tennis Canada to hang at the Rogers Cup tournament. “I don’t think it’s in good taste,” Powers concludes. Yet her breasts are hardly popping out of her top, which is so high as to not even show cleavage. So what’s the fuss? Eagle-eyed viewers can see a little bulge in her tennis dress made by her nipple. Tennis Canada quickly printed a new banner with the offending body detail airbrushed out. Meanwhile, Sharapova pulled out of the tournament, citing an inflamed muscle — in her chest. (Toronto Star) …And here you thought the U.S.A. was the most hung up nation on the planet.

Maybe she should bind her breasts. We wouldn’t want people to know that there are women playing women’s tennis. Or maybe, just perhaps, someday, society could just grow the hell up.

I heard from a couple of Canadian readers, who said that Prof. Powers was misrepresented by the newspaper story. I reviewed the source story from the Toronto Star and confirmed that I was accurate in my summary of the story. And, again, I confirmed that the two photos they used to illustrate the story were the same as I have on this page. They were.

The obvious conclusion was that Prof. Powers was complaining about the photo shown. (Note: when reviewing this page years later, I found the story and photos are no longer on their site, and removed the link. -rc)

So I contacted Prof. Powers to get his comments directly. He replied:

Date: Mon, 29 Aug 2005 18:37:17 -0400
Dear Mr. Cassingham
First of all, thank you for your note and the opportunity to set the record straight. I have received a number of e-mails calling me a prude (at best) and a number of more vulgar terms as a result of your article. Your article suggests that I was commenting on the “banner-sized photo” of Maria Sharapova. I was not. I was asked to comment on the newspaper ads and the picture that was on the flyers and brochures for the tournament. Please see below: 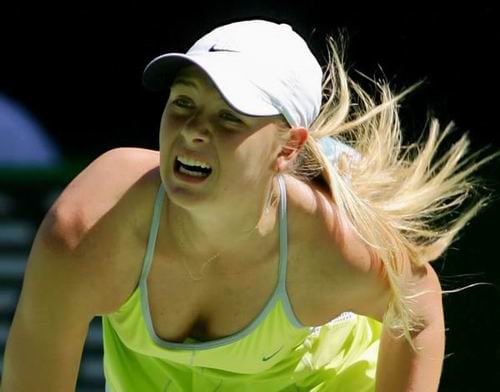 It is a picture from the Australian Open and it clearly does show Ms. Sharapova’s cleavage. This is the picture that I was asked to comment on as it was used for the ads, flyers and brochures. Tennis Canada also did apologize for using this picture, as you saw in the original article. I as not aware of the changes to the banner until I read about it in the paper, and I agree that they were being a little too politically correct there. My overall point was that Ms. Sharapova is a quality tennis player and that Tennis Canada did not have to sex her up to get people in the stands. What didn’t make it into the article was a further discussion on the state of women’s tennis and the comparison to the men’s game. If the women’s tournaments expect to have the same prize money, etc., then the sport has to be built on their athleticism and the quality of their game, rather than on cheap shots of the T&A variety. This isn’t a beer commercial after all. I hope that explains my position and once again, thank you for checking into the story in more detail. By the way, I did visit your site and I think I will subscribe as it is really quite interesting and entertaining.
All the best,
Richard Powers

Reasonable adults may differ on the “T&A” quality of the photo, but what I find of more interest is why the Toronto Star spent so much effort to convince its online readers that the tiny nipple tent in her dress was the source of controversy?