She said she wanted a man who knew the things she liked.

She said she wanted a man who would remember her birthday. 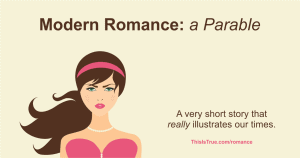 She said she wanted a man who would save every photo of her.

She said she wanted a man who understood her political leanings.

She said she wanted a man who knew who every one of her friends were.

She said she wanted a man who knew her dress size, and her favorite color.

She said she wanted a man who knew what gifts she would like, even before she did.

She said she wanted a man who remembered the places she liked to go to, and what she wanted to eat.

“Sounds like what you really want is a stalker,” I said with a nervous laugh.

And then she dumped me. Said she found the perfect man who filled every one of her requirements, and more!

Well, I had to know who this guy was and understand his secret.

And I finally figured it out.

Mark Zuckerberg. He records every “Like”. He knows her birthday, and saves every photo of her — even the ones she thought she deleted, and even the ones other people post, whether they put her name on it or not. He understands what her political leanings really are, not just what she says they are. Zuckerberg knows who every one of her friends are, and how much attention they pay to her.

He doesn’t just know her dress size, he knows her pants size, her panty size, her bra size, her ring size, and the exact color she dyes her hair. He suggests every gift she might want …and takes a cut of the purchase price when she buys it, or someone buys it for her. He knows where she goes, when, who is with her, and how much she spends there. He even knows about that mole she’s worried about.

He knows it all …and more. He even knows about every web site she goes to, and how long she spends there. Mark Zuckerberg’s Facebook knows more about you than you do.

I guess I was right: she wanted a stalker …who is looking for any angle to slip a couple of dollars out of her purse every day.

And it figures: he’s married!

I really think I dodged a bullet here.

7 Comments on “Modern Romance: a Parable”