I Was Hoping to Write a different Honorary Unsubscribe this week, but couldn’t because I couldn’t get information. Debbie Crawford, a 25-year veteran paramedic in Denver, died this weekend. The scuttlebutt is that her PTSD got so severe, she committed suicide — she could no longer handle the stress of the job. If that is indeed what happened, and I don’t know for sure because none of the media outlets in Denver has covered her death at all, that’s truly a tragedy.

Emergency Medical Services personnel are often treated as the bastard stepchildren of emergency responders; we heard again and again, for instance, about how many cops and firefighters were killed trying to save people in the 9/11 collapse of the World Trade Center, but rarely are the medics mentioned in the same breath. That’s often because EMS is a “third service” or even privately run (including, of course, volunteers!), yet medics are among the folks who run toward disasters, not away from them.

When someone is terribly injured, the cops and firefighters bring in the medics; it’s the medics who have to deal with keeping those people alive until we can get them out of dirty, stressful environments to a nice, clean hospital. They could be screaming in the worst pain imaginable, and medics are hampered by politics (we can’t let them give DRUGS!), policy (you need HOW many doses? If you don’t use them by the expiration date, we have to throw them away!), or the very conditions that caused the problem in the first place: bombers, shooters, crashes, building collapses. The very definition of traumatic stress. And society blows them off like they don’t matter (unless you’re the one who needs them right now, eh?) 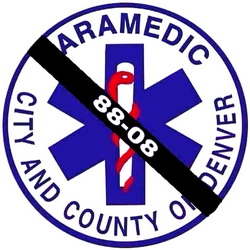 So if Deb committed suicide because she couldn’t get help coping, it makes me terribly angry. And no one outside the medical community seems to care. I contacted the Emergency Medical Services Association of Colorado, who are supposed to represent the state’s medics. They had posted an “ain’t it awful!” message on Facebook about Deb, so I asked them, “What I want to know is, why don’t ANY of the news outlets in Denver have anything about her death?” And their response was, “Because the press generally does not cover suicides.”

Really. So, if a Denver COP committed suicide due to job stress, that wouldn’t be news? Well of course it would be. So why isn’t it news when a street medic dies that way? Well, it certainly is.

Now, again, it’s possible that the scuttlebutt is wrong, and that wasn’t the reason. That’s why I couldn’t write it up as an H.U.: I wanted the facts, and just couldn’t get them.

So next time you hear about the “heroes” who run toward disaster, and are only told about police officers and firefighters, step forward to ask: “What about the medics?”

If you wonder, on 9/11 at the World Trade Center, 414 of those killed were emergency responders trying to save the victims of terrorism. They included:

We need to remember all of the people we employ to respond to society’s disasters. So if that list is incomplete, let me know so I can correct it.

And Deb: rest in peace. We’ve got it from here.
– – –
Update: Sure enough, it was talked about online so much, some Denver media outlets finally covered the story. And sure enough, Deb’s family confirms that job stress was a factor: she did it hours after responding to a particularly bad accident, a light rail train vs. a pedestrian.

“She didn’t kill herself,” someone said after hearing about this. “The job killed her.”