Video Captures and Update Below

So much for taping drunk drivers stumbling around. This cop had a much “better” use for his vehicle camera system, spending hours of on-duty time making, and later watching, recordings. From True’s 5 March 2006 issue:

Jack Munsey, 36, a Martin County, Fla., sheriff’s deputy, has been fired after an investigation showed he was using his patrol car video system “for unofficial purposes.” Video from Munsey’s car camera included zooms of bikini-clad women, “an extreme close-up of a motorcycle passenger’s breasts,” and scores of other “inappropriate” images, the investigation found. A Police Benevolent Association attorney says the various shots of multiple women were not a “regular” thing, but “only an isolated, dumb, stupid and [juvenile] event.” (Palm Beach Post) …The PBA’s message: for a citizen, twice is “multiple offense”. For a cop, dozens and dozens is an “isolated event”.

Screen Caps from his Camera 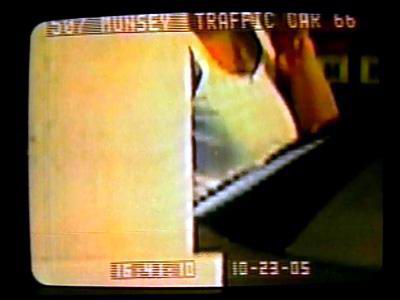 Part of a Pattern

As noted, Munsey appealed his firing. An all-day hearing was held before a five-member review board consisting of his police peers. The Board noted that this was not Munsey’s first trouble with the department:

As for the current case, “He zoomed in on their breasts. He zoomed in on their posteriors,” said an attorney for the sheriff. “They sure don’t expect that from people wearing [police uniforms].” He also pointed out that at least one of the girls on the confiscated tape was underage.

The review board then went into deliberation. It took just four minutes to reach a unanimous decision: to uphold Munsey’s firing.