Lisa Jensen hung a Christmas wreath on the outside wall of her home in Pagosa Springs, Colo. The pine boughs were arranged into a peace sign because she “wanted to put a message of peace out there,” Jensen said. But Bob Kearns, the president of her homeowner’s association, ordered her to remove the wreath on the grounds that “signs, billboards or advertising structures of any kind” are banned, and subject to a $25-per-day fine. The HOA’s entire architectural control committee resigned in protest, and Jensen refused to remove the wreath. “The peace sign has a lot of negativity associated with it,” Kearns claimed. “It’s also an anti-Christ sign. That’s how it started,” he said, calling the peace sign “Satanic”. After a local — and national — outcry, Kearns backed off. He apologized and said the wreath could stay. (Durango Herald) …Chalking up another win for that darned peace-loving Satan.

There was, of course, reader reaction, virtually all of it readers finding it hard to believe there are such nutballs out there. But….

Every time you have a nutball like the HOA president going off the deep end in a spectacularly public fashion, there’s some other nutball out there to defend him. But first, an example of the majority opinion:

If [HOA president] Kearns actually knew anything about the development of the peace sign, he’d know that far from being ‘an upside-down, broken-armed cross’ (whatever THAT is supposed to be), the peace sign originally stood for [The Campaign for] Nuclear Disarmament, representing the semaphore flag signal positions for ‘N’ (straight up and down) and ‘D’ (left and right 45-degree down) superimposed together. Leave it to the Brits to reference something no one in America understands, and American Christians are just sure is ‘satanic.’ —Dex in California

Certainly someone from the military would get the “N.D.” bit, even though Dex got them backward, right? But here’s one from a veteran of the Vietnam war:

Maybe you are too young to remember, but the so-called ‘peace’ sign which you apparently support, was the symbol of draft-dodgers and hippies of the ’60s, protesting our part in the [Vietnam] war mainly because they were too cowardly to participate, just as they considered themselves too good to be a functioning and productive part of society. They thought it made them wiser than everyone else to sit around fogging their minds with pot and LSD. The same thing is happening now with the Iraq invasion protestors. How quickly they forget that 3,000 Americans were killed in less than an hour in 1991, in an unprovoked attack on our own homeland. The links between that and our actions in Afghanistan and Iraq are undeniable if someone really wants to look at it. All civil people want peace, but the aggressors of this world will always make that an impossible dream. If we fail to act against them, they will certainly continue to act against us, with more and more boldness and power. The ‘peace’ sign’s anti-Christian intent is obvious; why else would it be a broken cross, as the cross is the symbol of Jesus and nothing else that I know of? How can we celebrate His birthday by displaying an anti-Christ symbol? Satan is a deceiver, and he is certainly deceiving people like that ignorant woman — and you. —Johnnie in Alabama

Wow: ignorant indeed! Where do I begin?

Yes, I’m old enough to remember the peaceniks of the 60s, and despite my tender age I knew even then that the “peace sign” was derived from the semaphore signals for N and D — and what that stood for.

(I’m also old enough to remember why that was a big deal as we had “duck and cover” drills in school, which was somehow supposed to help us all survive attacks by nuclear weapons.)

Hard For Some to Admit It

Think of them how you wish, but the hippies were essentially right about Vietnam. The lesson this country supposedly learned from that conflict was to not engage in war unless our national security was at risk, and now we have a bipartisan committee agreeing with the vast majority of the population — that invading Iraq was a spectacularly bad idea (to bring it back to the story at hand). To lump them all together as draft-dodging anti-social druggies is to massively miss the point — you’re not really arguing that James Baker is some sort of acid-tripping commie, right? 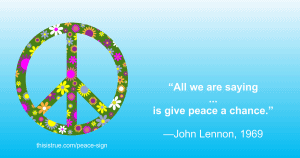 So the hippies adopted a symbol begging for peace to …yes… also beg for peace; so what? That doesn’t degrade the symbol’s meaning or intent, which is well documented.

There is nothing “satanic” about the peace symbol, and there never has been. There are only two classes of people who think so: extremely gullible fools and manipulative, paranoid fundamentalists who have the ears of extremely gullible fools. And gee: wasn’t it manipulative, paranoid fundamentalists who started this whole Islamic terrorist thing in the first place?

Read just one well-researched explanation of the origin of the peace symbol, right down to who it was that designed it, and when: 21 February 1958 by British commercial artist Gerald Holtom, as commissioned by the Campaign for Nuclear Disarmament.
– – –
Sure enough, “Johnnie in Alabama” offered no response.