You’ll no doubt have questions after reading the story and seeing the photo, from the 5 December 2004 issue.

Answer #1: They let the smugglers go because they catch so many people doing stuff like this that they only bother to prosecute the most egregious cases.

Answer #2: A “Coyote” is slang for people who smuggle people over the border from Mexico to the U.S. They charge high rates: from around $1000 per person to lead them overland and through a gap in the fence to around $5000 to try to take them across a border crossing hidden in a car like this; many choose the more expensive route since sometimes people die trying to cross the desert on foot….

And Answer #3: I don’t know what made the Customs agents suspicious….

U.S. Customs officers at the Mexican border crossing at Tecate, Calif., were suspicious of two U.S. citizens who were coming in to the U.S. with several pinatas. “Officers began to take the pinatas out of the back seat, and one seemed to be much heavier than the others,” a spokesman said. They found a 4- to 5-year-old girl sealed up inside, apparently so she could be smuggled into the country. The girl’s mother was found in the trunk, and her 9-year-old brother was behind the back seat. The Mexican nationals were deported, and the couple driving the car were released. (San Diego Union-Tribune) …Officials deny the pinata was in the shape of a coyote. 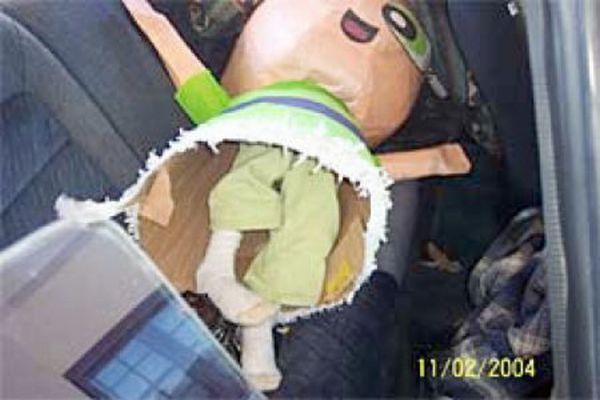 Related Page: This sort of smuggling technique is inventive, but perhaps not quite as much as the full-grown man who was disguised as a car seat!