It has nearly been a decade since the price for a Premium upgrade changed — it went to $24. Premium subscribers themselves have said it’s too cheap. I wanted some detail, and was boggled by what they told me.

An astounding 94.5 percent of Premium subscribers — the ones already paying for the expanded issues, so they’ve seen what they’re getting — said I should charge them more.

This is no anecdote-based guess: I ran an anonymous survey asking what they would “happily pay” for Premium. I was blown away that more than 1,200 existing Premium subscribers answered the survey — that’s a huge percentage of the subscriber base, and I only gave them a few days to answer. My pre-survey guess was they’d center on $27 year. I was wrong; only 12.3 percent chose $27.

The biggest group — at 34.6 percent — responded that they would “happily pay” $29/year. An additional 34.3 percent said they would pay even more than that. Wow: almost 69 percent of those already paying say I should charge at least $29/year because they think the publication is worth it.

And that number doesn’t even count the many who didn’t select any of the pre-set options, but rather left everything unchecked and put a different amount in the Comments area. Every one of those suggested $30 or more.

Here’s the summary, clipped right out of Survey Monkey: 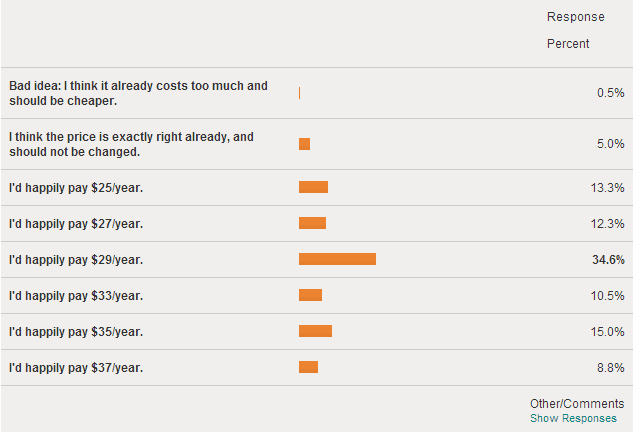 Premium subscribers don’t just think the expanded issues are worth the price, they strongly feel their subscriptions are worth much more than the price charged, and almost unanimously support a significant price increase.

Their Free-form Comments Tell the Story

Just some of the 293 comments. I’ve added a response to a few comments/questions (in parens and blue).

I can either raise the price, or work toward shutting down This is True so I can move to something that will pay me more. I’ve not just not had a raise, but I’ve actually been taking pay cuts for most of the five-year economic downturn.

Poor me? Not at all: I know many readers are much worse off. But I’m not going to let the publication bankrupt me when I know I can do better.

More than 94 percent of the readers in favor of a price increase isn’t a suggestion, it’s a demand that I make sure True continues. It’s rational selfishness: they want it, and understand that in order for me to want to continue to do it, I need to be paid better. So if it takes just $5, or $10, or $15 more for them per year to get what they want, it’s pretty damned smart to offer to pay that.

There were significant patterns in the comments: the most-repeated comment was, why didn’t I include any even numbers? Because then there would be too many response options. I’m trying to get a feel for what they want, not an exact dollars-and-cent figure.

The second-most-repeated comment: allow subscribers to pay more if they want to — let them choose the price they want to pay over the base rate so they can help to support the publication. Several say they can afford it, and if it helps to keep the price down so more people can upgrade, they’re fine with that.

That was another “wow” for me; I’ve heard that many times before, but the call is definitely getting louder. Granted.

The third-most-repeated comment: the price should be $30, not $29 — which surprises me in that so many seemed to sense that the responses would center on $29. I do happen to prefer round numbers myself: the True books, for instance, were set (in 1995!) at $11 even, not $10.99, even though it has been proven again and again that the general public sees those as two very different numbers: $10.99 is much less than $11, and thus does result in more sales! I just don’t want to play that game — the “people are stupid so let’s fool them to get a few extra bucks” game.

Thus, the Premium subscription rate will rise to $30 on August 11 (that’s the date of Issue #1000). There will still be a discount for two-year terms: $55. The delay gives those who are cost-sensitive a chance to jump in at the 2004 price, and they’ll have a year (or two!) to decide whether they wish to continue at the higher rate.

I truly appreciate the amazing support and dedication this shows.

Per reader request, the next increase came a little sooner, and it’s now $32/year.