It was a good day to stay inside today. Just because it’s well into Spring doesn’t mean it doesn’t want to snow in Colorado! It came down all day today, sometimes in “whiteout” conditions, piling up about 18″ (46 cm) at my house. It stopped about two hours before tonight’s newsletter went out, so I just posted an amazing photo of what happens here when it snows: 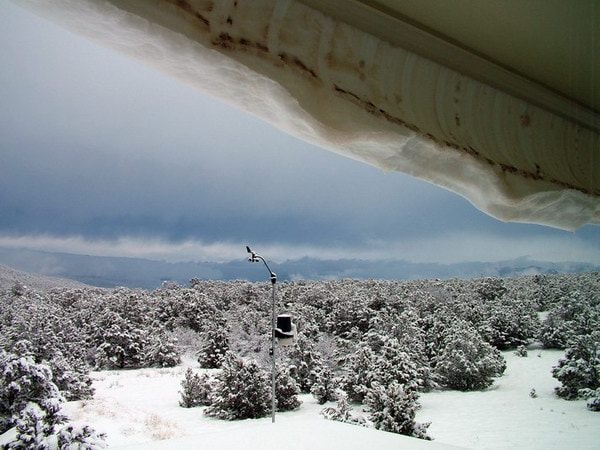 The photo shows what the snow does when it gets heavy and starts sliding off my metal roof. It slides v-e-r-y  s-l-o-w-l-y — and thus hangs way, way over before it falls.

In the photo, it’s hanging down about 2 feet (or about 61 cm, for those of you who use a more rational measuring system). It’s been like that for several hours. (Yeah: it’s dirty! That’s the dust that ended up on the roof from a windstorm — red sand from the Utah deserts.)

You can see my weather station in the middle of the photo too. Even when I’m not home, I can pop to it on the web via my phone and see what the conditions are at home. Handy!

Keeping an Eye Out

I put my desk in a corner where I can look out windows to the east and to the south, since there are spectacular mountain ranges to the east and south. Since I type well, I’ll set there and write while looking out the windows, looking at the view.

I’ll be sitting here in my office when I’ll suddenly see something big moving in the corner of my eye. It’s one of those huge chunks of snow, which has finally gotten heavy enough that it can’t hold on to the roof anymore. If a long enough piece goes, what seems like several seconds later (it’s a two-storey house) there’s a big whump as it hits the ground, sometimes shaking the house a bit.

Another shot I just took: it got clear enough for a few minutes that the tallest (the 14,150 ft — 4,312 m — Mt. Sneffels, named after a volcano in Iceland) mountain peak peeked through the clouds. I got a nice photo out the office window. Then a shot of what it looks like when it’s clear — which it was three days ago: 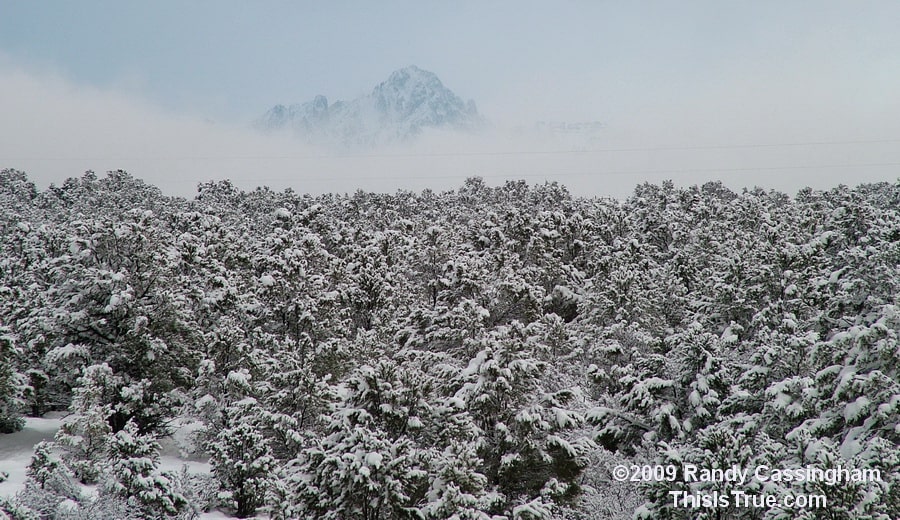 Those are pinyon pines there, weighed down by the snow. We have about 3,000 of them on our property.

Yeah, it sucks that I have working conditions like this, but someone has to suffer through it. Though it works out well for you: it’s one of the reasons I don’t mind my 50-60 hour work weeks, typically spending time in the office seven days a week.