I ran a survey the past week asking what you wanted to see in True’s book compilations. Here are the results.

The annual This is True book volumes are simply compilations of the stories from each week’s columns. Volume 1, for instance, covers the first year of stories, in the order which they were originally presented. (When there’s a significant update on the web site to any story, the URL is provided to see it.)

But my software is set up to allow me to gather up stories by category or keyword, too, enabling book collections of True stories on specific subjects. The idea was to see if you had interest in that!

Here’s the chart of what categories/subjects you found of interest on a scale of 1-10, with 10 being “Very Interested” in reading such a book: 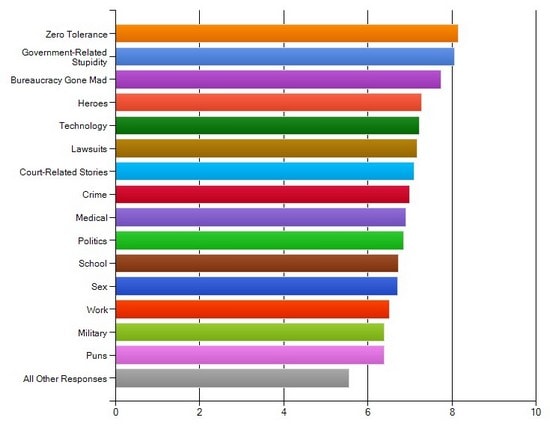 The type along the left is pretty small, so I’ll call it out, in order from “most interested” down:

My intuition was that you would love a book on Zero Tolerance, with some added context about what the idea means about humanity and society. And with that strong support, I am going to work on that. Stopping this institutionalized torture of children — which has spread out into the general society, since children do grow up — is one of my bigger goals.

Seems to me that “Government-Related Stupidity” and “Bureaucracy Gone Mad” are nearly the same thing — yeah, I know, I’m the one who set up the categories! — so with the combined interest, that one might actually outrank ZT. So I’ll probably try that one first, and if there’s enough interest shown (read: enough of you actually buy it!), I’ll continue down the list in a way that seems logical.

So thanks much for your feedback!

The Other Two Questions

Just getting a ranking was great, but surely you wanted to share some more open-ended feedback too. There was way too much to share, but here are the highlights. I reply to several of them in italics.

Q2: In your own words, how do you think of This is True? By that we mean, in one short sentence, What is This is True really “about”?

Again, great stuff, everyone! Still a lot, even though I hacked out most of it, but I found it extremely interesting. Thanks again.

See what books are available here.