I thought it was clear enough that “the Norman Rockwell” story isn’t really about Rockwell per se, but the comments about the story on Facebook are so out of left field, I thought I’d revisit it. First, the story itself, from the 1 December 2013 issue:

Norman Rockwell, who died in 1978 at age 84, is still considered an icon for the way he captured the American experience with his paintings, created for the Saturday Evening Post (more than 300 original cover illustrations over 47 years), the magazine of the Boy Scouts of America, Boy’s Life, and many other publications. Multiple U.S. presidents sat for portraits by the idealist American painter. But a new biography paints Rockwell in a different light. He was a high-school dropout. His first wife left him for another man; his second wife apparently committed suicide. He ignored his three sons; “There was a hollowness where the family was supposed to be,” says Jarvis, the eldest. His third wife, the biography says, was “his feminine ideal: an elderly schoolteacher who was unlikely to make sexual demands.” And, it adds, he may have been gay. At the very least, he “had intense emotional relationships with the men and boys who modeled for him,” though there is no evidence of sexual liaisons with any of them. (RC/Albany [N.Y.] Times-Union) …Yep, that’s the American experience all right.

I thought that even if people didn’t “get” the point of the story, the tagline made it pretty plain. But apparently not.

As noted, the story was posted on Facebook. The reactions were mixed:

So f****g what??? I do love his work, have all the books of his work I have been able to put my hands on and would buy anything new. I am not american, nor gay, and my family is splendid…Why sh** people this way??? It’s cruel, it’s unnecesary, it’s not even proved true. –Rafael, Spain (*s quoted from the original)

What’s so silly is that it doesn’t matter. I takes nothing from and adds nothing to his talent. So, it comes down to…Who cares? –Cynde, B.C., Canada

Yes…it’s true. Everybody in the past was gay. There, I said it. It’s time for the truth about every famous person in history to come out of the closet. (Now where’s that “rolling my eyes” emoticon…?) –Jonathan, Oregon

Before I get to the point, which is not “about Rockwell,” the prize of completely not getting it has to go to this one:

Oh look, the tagline of a racist bigot. Remember people, only in America have people ever been idolized. Does Randy even read his own articles anymore? –Cliff, location hidden by Facebook privacy settings.

Wow: what confusion! A white guy is bitching that a white guy is “racist” when it comes to commenting about a story featuring …a white guy. Uh huh.

Yeah, Cliff let his emotions get in the way of actually thinking. Maybe after reflecting on things for a few days he’ll let logic kick in, right? Nope: he came back a few days later to follow up — after this page was posted:

You don’t know what racism is, do you? My comment was about the tag line that specifies Americans. I used the term correctly. Racism is not only about skin color.

So apparently his complaint is really that an American made a comment about Americans in a social commentary column story that featured …an American. I guess he doesn’t know what racism is.

But others got a lot closer, or even hit it right on the head:

I don’t think Mr. Rockwell painted a perfect past, he only captured moments that resonated with many among his audience. I’ve also found that many who imerse themselves in their vocation as completely as Mr. Rockwell did, often do so at the expense of their family and social lives. Few of the most celebrated artists had what one might call a happy family life. –Debbie, South Carolina

I think it’s a perfect metaphor. In those days, those problems did exist just as they always have. But society tended to pretend they didn’t exist. –Michael, South Carolina

It’s Not About Rockwell?!

When you consider that True is social commentary (and news commentary in particular), it’s wise to step back a little and think about what the topic really is.

To wit: no, this story is not “about” Norman Rockwell. It’s about “the American Experience” that Rockwell captured so well in what a lot of Americans consider an “ideal time.” 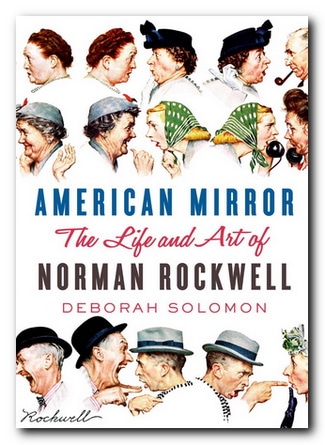 Rockwell did a great job of capturing idealism, and was “iconic” as an American “who served as our unofficial ‘artist in chief’ and bolstered our country’s national identity,” as the book’s dust jacket puts it. So much so, the book’s very title is American Mirror.

And it’s “about” what a book needs to do — or what its author and/or publisher thinks it needs to do — to sell books today. The dust jacket continues that Rockwell was “a lonely painter who suffered from depression and was consumed by a sense of inadequacy. He wound up in treatment with the celebrated psychoanalyst Erik Erikson. In fact, Rockwell moved to Stockbridge, Massachusetts so that he and his wife could be near Austen Riggs, a leading psychiatric hospital. ‘What’s interesting is how Rockwell’s personal desire for inclusion and normalcy spoke to the national desire for inclusion and normalcy,’ writes [author Deborah] Solomon.”

Not to me that’s not what’s interesting, but rather that book publishers feel the need to get all breathless and conspiratorial about describing a human being.

Yep: we all suffer internal conflict, unease, and insecurity about whether we “fit in” with others. We indeed all want “inclusion and normalcy,” as Solomon grasps.

So what is it when you have a person who struggled in school, had trouble with relationships, wasn’t a perfect parent, enjoyed their work, and was sexually ambiguous, even if they didn’t want to talk about that ambiguity in public? That’s called a human being. And sure enough, “…Yep, that’s the American experience all right.” — and the melting pot of America (e pluribus unum) reflects the majority of the world.

“It’s a perfect metaphor,” Michael in South Carolina said above. “In those days, those problems did exist just as they always have. But society tended to pretend they didn’t.”

Exactly. And as Graciela in Texas summarized, “Perfection is just an illusion.”

It always has been.

The story isn’t “about” Norman Rockwell, it’s about us all.

18 Comments on “This Isn’t About Norman Rockwell”