TJI is proud to be hailed as among the “Best in Net Entertainment” in Internet World magazine’s “The Best and Worst of 1994” issue, just months after going online. 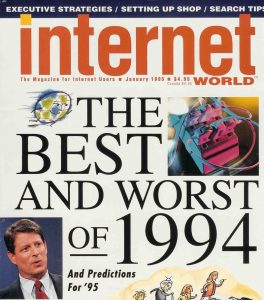 “Every week, Randy Cassingham rounds up the strangest news events he can find,” they write. “He then throws in a line or two of hysterically funny, ironic commentary and mails the whole thing to thousands of his closest friends around the world.”

Especially early on, TRUE got a lot of press coverage, since journalists liked it, and it helped answer the question everyone was asking about the Internet back then: “What can you DO there?”

In any case, being named one of the “best” things to do online was a nice way to finish out the first year of publication (which was actually just over six months, since TJI didn’t start until June of 1994).