As with every Sunday, I “had to” work on Easter — it’s when I write the stories for True (and edit the ones that come in from the writers). I pull together 10 or more stories each Sunday (11 yesterday, as it happens, plus one that I’ll be adding to the blog later since it must include a photo).

It came together quickly and well, which left me a bit bored. I decided to have a little fun on Twitter. I “tweeted”:

Was going to get Peeps for Easter, but couldn’t find any that were cage-, hormone- & antibiotics-free. Demand organic Peeps!

I quickly followed up with:

Dunno if it’s true, but I hear Peeps’ feed includes bodies of other Peeps who died in their cages! Demand free-range Peeps!

My goal was to get some good reactions from others who were also a bit bored — and I got them!

I Actually Wouldn’t Consider Eating One

If you don’t know what “Peeps” are, by the way, they’re a marshmallow-based candy shaped like chicks which are — for some unknown reason — popular at Easter. 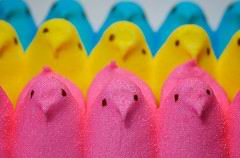 My assistant Becky was working too, sitting behind me, and I could hear her chuckling at what I was doing. She quickly weighed in:

I hear they cut off the Peep’s beaks to keep them from fighting through the cages, too. It’s just cruel.

About the same time, I thought of something else to add:

It’s a tragedy that they’re grown in cages, away from natural sunlight, being force-fed to fatten them up.

Well, that did it: other readers started to weigh in. There were scores of “Likes” on Facebook, and lots of comments. Here are the best:

And a number of people threw in the “Soylent Peeps” concept.

The thought of Peeps having to “sit in their own sugar” made me roar with laughter!

Thanks, all, for having fun with me!

20 Comments on “Watching Out For My Peeps”