There are times that a photo doesn’t just add to a story, it makes the story. This is this week’s most-suggested True story, from the 24 April 2011 issue:

Let’s See If You Can Picture This

Anthony Garcia, 25, a gang member in Pico Rivera, Calif., had an elaborate tattoo on his chest. It was so detailed that when a Los Angeles cop saw it, he took a photo of it for the department’s gang tattoo collection. Later, Sheriff’s Dept. homicide detective Kevin Lloyd was looking through photos in the collection and came across Garcia’s tat. He immediately realized it depicted a case he had been working on — one that had hit a dead end. The tattoo was the story of an unsolved murder in front of a Pico Rivera liquor store from 2004. He pulled up evidence photos from the case file, and began making correlations to the tattoo. The drawing had incredible detail, such as the Christmas lights on the store’s roof. “Think about it,” said Capt. Mike Parker. “He tattooed his confession on his chest. You have a degree of fate with this.” Indeed: Garcia was arrested for the shooting, and was recorded bragging about the murder with his cell mate, police say. His cell mate was an undercover detective. Garcia has allegedly given a full confession to police. (RC/Los Angeles Times) …By signing his chest.

Courtesy of the Los Angeles Police Dept. Click to see a larger version: 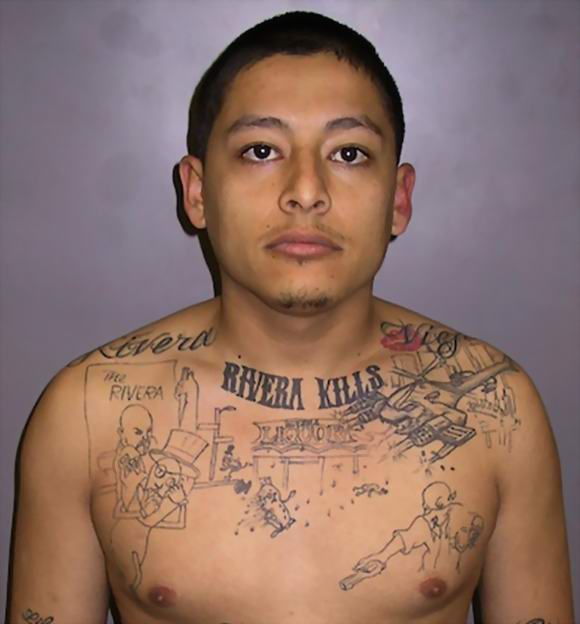 Sample Details From the Photo

Even the streetlight depicts the real thing at the crime scene.

This case well outstrips the 2005 story of the burglar who tattooed a gun he stole onto his body — complete with the stolen gun’s actual serial number.

“You’ll have a long time to think about what you have done and how ridiculous it is,” Norwalk Superior Court Judge Thomas I. McKnew Jr. told Garcia at his May 2011 sentencing hearing. “It would appear from your attitude of non-remorse and your smirks…you have sociopathic tendencies,” he said. “You are a serious, serious danger to society. I don’t know what thought you’ve given to your future. You have no real future.” McKnew sentenced him to the maximum: 65 years to life in prison.

Since “Anthony Garcia” is a pretty common name, and none of the press reports I saw mentioned his middle name, I was not able to conclusively determine what prison he is housed in, nor what his potential release date is.

Garcia is back in the news. He’s still in jail, of course, but jailers have finally figured out that despite the huge publicity of this case, Garcia has been collecting unemployment benefits the entire time!

“It’s pretty appalling when you think about somebody sitting in jail collecting unemployment,” said Capt. Mike Parker, spokesman for the L.A. County Sheriff’s Department, who was also quoted in the original story.

It’s considered fraud: Garcia’s father, Juan Garcia, 47, and his girlfriends (um, yeah: plural) Sandra Jaimez, 45, and Cynthia Limas, 25, were arrested and charged with unemployment fraud. They allegedly cashed the jailed man’s $1,600-per-month checks; some portion of the money would be deposited into Garcia’s jail account — and the accounts of other members of the gang who are also in the jail.

The total payout before the scheme was discovered: more than $30,000. Garcia himself may be charged as an accomplice; that possibility is being investigated.

43 Comments on “Let’s See If You Can Picture This”