I find it difficult to “celebrate” any death, but I have to admit to feeling a bit of satisfaction that a man who declared war on us finally got a small measure of payback. (“I’ve never wished a man dead, but I’ve read some obituaries with great pleasure.” —Mark Twain)

Bin Laden instigated the death of thousands of innocent people, essentially for nothing. Yet you can believe that there are just-as-radical folks on the other side who will continue the propaganda war, such as insisting that the only reason OBL was killed was to cover up …something.

We’ll figure out what later, eh? But surely it must be a conspiracy, eh? Of course, the quick burial at sea was to “hide evidence” rather than respect the religious decree that the body be buried quickly (etc. etc. etc. sigh) Break out your tinfoil hats.

I am, however, particularly happy that I don’t have to write an Honorary Unsubscribe for any of the Special Forces troops that got Bin Laden. The best part: it pushed the Royal Wedding off the air. On the other hand, it all made for a fairy tale weekend: the Common Girl married her Prince, and the Bad Guy was killed. May they live happily ever after. 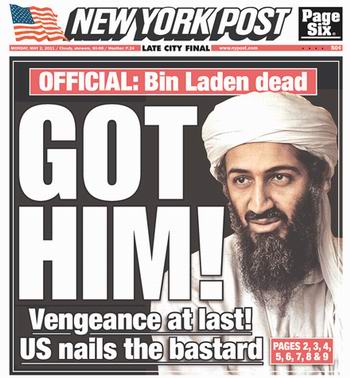 And hey, my question for Sammy: how’s that “72 virgins” thing working out for ya? Which, of course, reminds me of an old joke:

After getting nailed by a Special Forces commando, Osama Bin Laden makes his way to the pearly gates. There, he is greeted by George Washington. “How dare you attack the nation I helped conceive!” yells Washington, slapping Osama in the face. Patrick Henry comes up from behind: “You wanted to end the Americans’ liberty, so they gave you death!” Henry punches Osama on the nose. James Madison comes up next, and says, “This is why I allowed the Federal government to provide for the common defense!” He drops a large weight on Osama’s knee. Osama is subject to similar beatings from John Randolph of Roanoke, James Monroe, and 65 other 18th-century American revolutionaries. As he writhes on the ground, Thomas Jefferson picks him up to hurl him back toward the gate where he is to be judged. As Osama awaits his journey to his final very hot destination, he screams, “This is not what I was promised!” An angel replies: “I told you there would be 72 Virginians waiting for you. What did you think I said?”

Is It OK to Laugh?

Yes, certainly it’s a good time to laugh. Few have cowered in fear, and besides, the whole thing is more than a touch absurd.

That’s the problem with OBL’s jihad: some whackjob will continue it now that he’s dead. For the rest of us, life goes on. May we all live happily ever after.

Several have asked me about the Twain quote, so I spent some time tracking it down. It’s not, alas, a Twain quote, even though a lot of people have attributed it to him. Here’s the actual definitive quote:

“I have never killed any one, but I have read some obituary notices with great satisfaction.” —Clarence Darrow

However, Twain apparently did say “I refused to attend his funeral. But I wrote a very nice letter explaining that I approved of it.”