I made a little graphic which I posted on Facebook earlier this week, and it seems to have hit a chord with the crowd there: 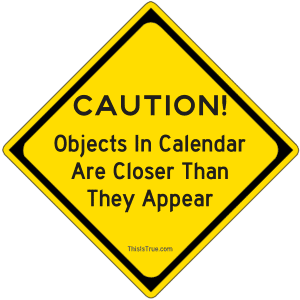 Click to see larger. (For the visually impaired, it’s a yellow “caution” sign similar to those posted along roadways, except this one reads “Caution: Objects In Calendar Are Closer Than They Appear”.)

In just four days, it has already been “shared” on Facebook more than 500 times. Wow!

Several have asked for a higher-resolution copy of the image to print and post by their calendars and such. I’m fine with that, as long as it’s not altered — I have a tiny credit on the bottom which, I hope, helps “spread the word” a little about This is True. To get it, click to see the larger version, and then you can right-click to download it.

What does this have to do with This is True? Well, it’s obviously not weird news, but it is amusing, and at least somewhat thought-provoking. Works for me!

(If you’re not a True reader already, you might want to subscribe to the free newsletter using the form in the sidebar: it’s thought-provoking entertainment!)

Where did that one-liner idea come from? Premium subscriber Bruce in California sent me a note of thanks for last week’s issue, and in the “signature” area of his email was that pithy sentence. However, I envisioned it as a yellow “caution” sign, so I added that one word and created the sign in my graphics software and posted it. It’s a great concept on its own, but just needed that little visual element for it to really take off.

I asked Bruce where he got it. He replied: “You’re right that I didn’t think of it myself. Sadly, I have forgotten where I [originally] saw it. I’m very pleased that you liked it so much.”

18 Comments on “A Cautionary Tale”