YAIBB — Yet Another Internet Business Book — arrived here on Friday, sent to me because it’s YAIBB that mentions me, This is True, and the GOOHF cards.

Looking at its Amazon reviews elicited a chuckle.

Sure, Click Millionaires (Work Less, Live More with an Internet Business You Love*) by Scott Fox has quite a few five-star reviews there. More interesting are the one-star reviews, which (at least in this case) clearly show how some wanna-be entrepreneurs Just Don’t Get It.

“Ignore all five-star reviews” headed the first (of the two, as of this writing) one-star reviews. “The fact that ALL reviews were for five stars should have alerted me,” the reviewer said. “I read the entire book, looking for AT LEAST ONE idea I could use. Nada.”

The other one-star reviewer, a woman, complained, “There is no such thing as work less live more when you are trying to build an on line busines. The only reason this book was written was to send traffic to his web site!,,,,”

(Those commas are apparently not any sort of mistake; later the same gal wrote, “you would be better off doing so research on line and save yourself some money!,,, Even one star is to good for this book!!!!!!!!!!” If one ! will do, 10 are better, right?) Tip: if they can’t spell “online” or “business” right, maybe they don’t know much about the concept.

Scott’s web site is ClickMillionaires.com [loading failed last time I checked]. Yeah, we entrepreneurs spend months working on books just so we can get visitors to our sites, who pay nothing to see the content offered. Riiiight! Great business model ideas you have there, Miss Onestar!

Business books aren’t about “ideas” — the homily “ideas are a dime a dozen” is absolutely true. Ideas are worthless. It’s the execution of a good idea that makes or breaks a business, whether it’s online or off.

How many “clones” of Twitter are there? Too many to count. And how many have gotten traction? Just Twitter itself.

Though first to market isn’t always best: MySpace launched in 2003 with a good “social media” premise (the idea), but the execution led it to only be adopted for the long run by kids and bands. When Facebook opened to the public in 2006, millions abandoned MySpace in favor of the better execution of Facebook.

How “original” is Twitter? It’s “microblogging” based on text messages (160 characters, with 20 reserved for addressing = 140 character messages to anyone who might happen to be watching). Nothing original there: it’s “just” blogging with a texting overlay. The magic came in the synthesis of two old ideas into something new (the idea), and the execution of that idea (the work of making it happen).

Indeed, what is This is True? It’s “just” a newsletter (one of the oldest forms of publications!) overlayed onto a new medium, email — adapting an old medium into a new one.

The content is “just” an old staple of the newspaper business: human-interest “filler” items, plus some personality or “attitude” (commentary, turning the filler into social commentary). It was the execution — good old-fashioned work, including coming up with commentary on every single story — that turned those simple ideas into a business that has lasted 18 years, and still going strong. One which, yes, over those 18 years has grossed millions of dollars; as Scott put it, “click millions.” 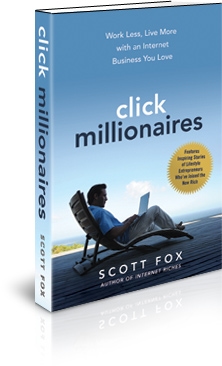 So what good is a book like Click Millionaires? It gives you scads of quick case studies showing how entrepreneurs synthesized new ideas out of old ones. Yes, it absolutely is short of the day to day, sometimes mind-numbing work involved to get there, but that is the kind of how-to tactical detail you research online, or get from your Mastermind group or a consultant.

Unlike what Miss Onestar thinks, yeah, I actually do get to pick and choose when I work, and as my assistant will tell you, I have long thought nothing of taking off hours for lunch, or taking off days for travel.

So Scott is correct: my online business does, in fact, allow me to “Work Less, Live More with an Internet Business I Love”. (And since I truly love my work, I don’t mind putting in long hours when I am here.)

Reading how others have done it allows you to create your own path — to synthesize elements of other ideas into new ones. That’s only phase one, also known as the easy part. The hard part is to then execute your new idea in a compelling way that brings in customers, readers, whatever — the income side of the business.

Books Don’t Give Ideas:
They Help You Implement Yours

By seeing what others did, you might come up with a new way of doing things. Mine was, “There’s software to create mailing lists! Instead of using it for a discussion list, I can use that to broadcast a newsletter!” (a radical idea in 1994; now there’s an industry around the concept).

Who knows what you might figure out by reading a book (or 10) about successful businesses, and how they got there? If you know that you want your business to be online, then yeah: read books about online businesses. They’re not all Facebook, Twitter, and Google: there are thousands of small businesses, like mine, that you can learn from. Where? People like Scott Fox, Jim Kukral, Paul Lemberg, and many others write books and articles to bring you the stories of the smaller ones, the ones you don’t hear about every day.

Those stories are there so you can read them and come up with a new idea or strategy. You won’t be creating the next Twitter or This is True, but you might come up with new ideas from reading about those businesses, or from the dozens of businesses you haven’t heard of before, but can read about in books; you can adapt the concepts that fit your idea, and then get started on your business execution.

Examples: A mailing list*? An offline viral card that raises awareness of your web site? A spinoff site that brings an entirely different audience to your business? The concepts are endless, which is why there will always be YAIBB to read.