I’m really taken with a video released on YouTube last week. It’s an Auto-Tune, which is the name given to soundtracks that use the audio plug-in of the same name. Auto-Tune was designed to correct the pitch of vocals, but clever music creators realized they could use it to make spoken word recordings musical. This is a fantastic example of the genre.

It’s not just fantastic because it’s a clever use of Auto-Tune; I’ve seen that and it’s fun, but it’s not amazing. But in this video, John Boswell not only put some spoken word to music with compelling visuals, but he also managed to distill the essence of what Carl Sagan was saying with his groundbreaking 1980 13-hour TV series, Cosmos: A Personal Voyage. (It also features a brief interlude of words from physicist Stephen Hawking.)

I’ve been asked to explain what it is that Sagan is saying here — not everyone “gets it” from the “music video.” The distilled message is this: Earth is just a tiny portion of a vast cosmos (“The surface of the earth is the shore of the cosmic ocean”), which is so huge and complex that it truly boggles the human imagination (various examples given).

The only way for humanity to expand is outward — off the planet (“The sky calls to us”), and we’re just starting the baby steps of looking out there (“How lucky we are to live in this time / The first moment in human history / When we are in fact visiting other worlds” and “Recently we’ve waded a little way out / And the water seems inviting”).

But we’re at a dangerous time in our history because we have developed the tools to destroy the earth, but not the wisdom to ensure we don’t (“If we do not destroy ourselves / We will one day venture to the stars). In summary, “I believe our future depends powerfully / On how well we understand this cosmos.”

I know not everyone will like the Auto-Tune effect, and it starts out a bit weird, but it’s only three and a half minutes, so stick with it: it’s worth it. I recommend you play it twice: once to watch it, and then again while reading along with the lyrics, which are below.

Sagan died in 1996 from myelodysplastic syndrome. He was 62. 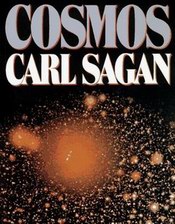 A still more glorious dawn awaits
Not a sunrise, but a galaxy rise
A morning filled with 400 billion suns
The rising of the milky way

But the brain does much more than just recollect
It inter-compares, it synthesizes, analyzes
it generates abstractions

This became a series called Symphony of Science, which is worth perusing to see if subsequent videos live up to this debut.

43 Comments on “A Glorious Dawn”