A tagline on a story this week is a homage to a popular subtype of humor email I get from friends from time to time: photos of (usually) Chinese people carrying impossibly huge loads on little motorbikes.

First the story from True’s 17 February 2008 issue, then some examples of the genre.

After a reader snapped a shot of him on the freeway, the Melbourne, Vic., Australia, Herald Sun newspaper tracked down the motorcyclist who had figured out a way to transport a gas barbecue on his bike. “Stuart” admitted it was not his first odd motorcycle transport: the 27-year-old native New Zealander has also moved a couch on his bike. “People say it can’t be done, but I proved them wrong,” he said. He admitted such transports were dangerous and pledged not to do it again — perhaps because the police were looking for him after the photo in the newspaper. (Melbourne Herald Sun) …Said Chinese motorcyclists who viewed the photo: “He was only carrying ONE?!”

I do have the photo that the motorist took (hover over the photos for pop-ups on what you’re seeing): 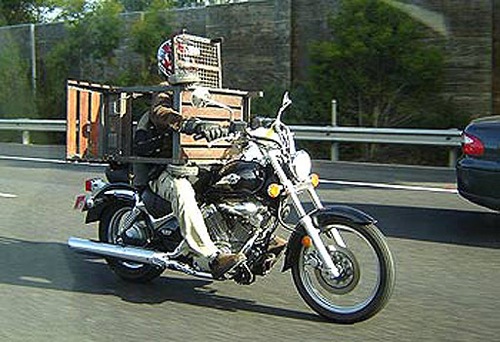 Here are some examples of the genre from Asia, from my files: 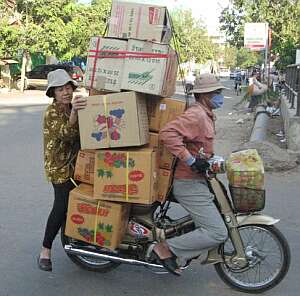 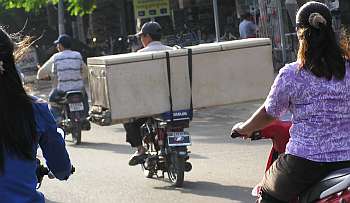 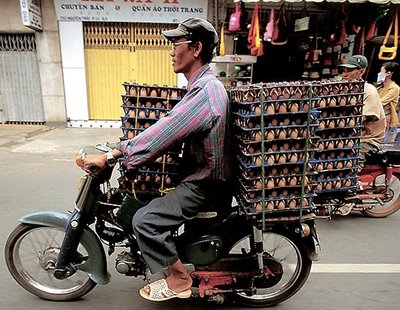 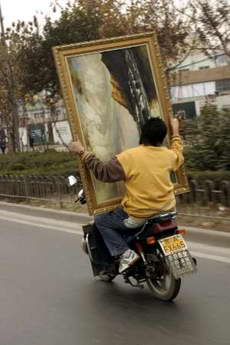 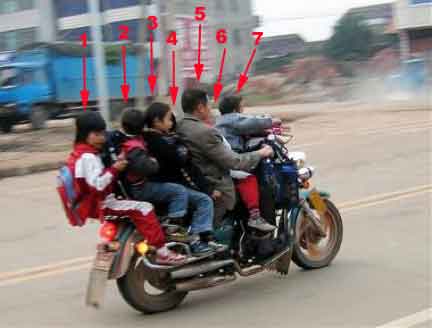 Well, the Melbourne biker’s name isn’t “Stuart,” and he was right to be concerned that the cops might be looking for him.

Michael Wiles, now 29, appeared before Magistrate Lionel Winton-Smith, who said he’s “seen people with perhaps bits of wood sticking out of the car, but a barbecue? I’m trying to think of a word to describe it.”

“Ridiculous. That will do,” the magistrate said.

McClure also noted that the grill was “a dud,” and “That’s probably why it was on the side of the road.”

How Do You Plead?

The charge was careless driving, and Wiles pleaded guilty. The court appearance turned into a discussion platform about the large motorcycle loads seen in Asia, as shown on this page, but Wiles “has been effectively used as an advertisement for what not to do on the roads, which he is wholly and completely in agreement with,” the attorney said.

“You could have been charged with culpable driving and facing the County Court if someone had lost their life” in an accident, Winton-Smith lectured — and then fined Wiles A$800 (US$752) and suspended his license for one month.

“I felt it was right to accept some responsibility,” Wiles said after his day in court. “The main point is that I’m happy that there was some justice served, and this might encourage the right manner of responsibility of drivers in Australia.”

And has he replaced the “dud” barbecue? “I’m better off without one,” he said.