Every Month, There’s a Tagline Challenge in the Premium edition — an extra story without a tag at the end, and readers can submit their best ending for the story. This month, the story was about a robbery that went bad at a drug store: the obliviot managed to defeat himself by pepper-spraying …himself.

Carl in New York submitted the entry, “…Even with a prescription, you can’t fix stupid.” — about which I commented, “Darn it!”

After the suggested tags were published, including the above, another reader, Mike in New Jersey, retorted: “Thank goodness Stupid can’t be fixed with drugs. If it could, This is True would suffer a huge drop in stories and the police would be a lot busier (all the formerly stupid crooks would now be smart crooks and thus harder to catch and prosecute). Without Stupid there’d be no more obliviots, zero-tolerance would disappear, there’d be no more stupid laws/rules/policies, and Congress would run a lot smoother. (tongue inserted in cheek) If that all happened, who would society mock & ridicule?” 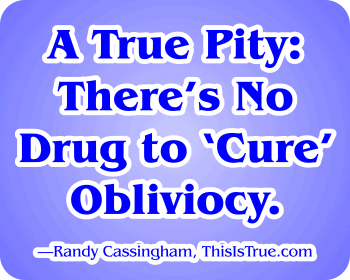 While Mike’s tongue was indeed in his cheek, I’d be fine with being out of a job because the world got so much smarter that there were no obliviots, no zero tolerance, no stupid laws, rules, or policies. A world where politicians would be smarter, and work for the good of the country, rather than the good of their donors (and to hell with everyone else; there’s a reason that the collective noun for obliviot is a Congress of Obliviots!)

Other kinds of obliviocy would be gone, too: ever notice just how babblingly stupid “white supremecists” are? When they burst into the news, they show with utter clarity how they’re anything but “supreme” in their thoughts, actions, or general existence.

My Tax Guy Has It Right. He’s an amazing tax expert, an enrolled agent who (being intelligent!) thinks the tax code is a total mess (see stupid politicians, above). He’d love to see a simple flat tax even though it would put him out of business. He says he would be fine “finding honest, productive work” rather than help his clients navigate through ridiculous loopholes and gotchas.

He’s not holding his breath, though, even if there’s a much better chance of sorting out our tax code than to instantly “cure” obliviocy in the world. It’s a nice fantasy to be put out of your job for the good of the entire world, but sorry: I’m not dumb enough to think it will happen in my lifetime. There’s no drug to “cure” obliviocy, and that’s a true pity.