There were several cranky responses to a story in last week’s issue. Let’s start with the story, from the edition dated 5 July 2009:

The city of Toronto, Ont., Canada, published a brochure on things to do around town. The “Fun Guide” showed a family having fun on the cover, but it was a family of “indeterminate ethnic background” — the family “looks maybe Latino,” said city spokesman Kevin Sack. To be more “inclusive,” the city pasted a black man’s face over the father figure. “You won’t find a more inclusive organization than us,” Sack said. (National Post) …And black people are welcome to have fun in the city, as long as they only visit virtually.

Now, before we get into the discussion, it might help to have the photos involved, yes? Well, of course I have them for you! 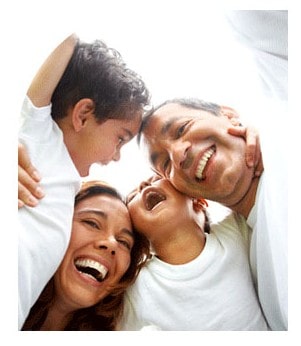 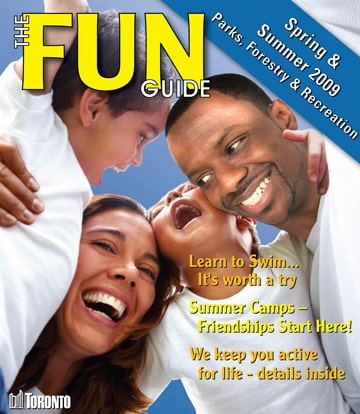 The story — or, at least, the tagline — brought a number of complaints. The least vitriolic letter is from Richard in Toronto, who wrote:

I’m sure you didn’t mean it, but the phraseology used in your Toronto story implies blacks are not welcome as visitors, i.e. “only if they come virtually”.

I know you didn’t mean it; that it was, as we say in the business, an infelicitous turn of phrase. But it is open to offensive misinterpretation.

So when you do set out to clarify matters, please first check out your favourite search engine for material on the Caribbean Festival that turns the city half black for a summer weekend every year, and note that the city’s new motto is “Diversity our strength”, as any resident knows we have the most ethnically diverse city in the world – by far.

I wouldn’t be surprised if some comments to this page will choose to debate the “the most ethnically diverse city in the world” point, but I’m not. Richard is “sure [I] didn’t mean it” but the “phraseology implies blacks are not welcome.”

He misses the point: I’m not saying that, but I wouldn’t be surprised if racial “minorities” got that impression from the city’s actions. They couldn’t find a black family for the photo? Really? And what of the “maybe Latino” guys in the city: the photo implies what? That Latino dads are absent, and some other guy has to step in?

Photographs send powerful messages, and the amateurish doctoring of this one sends a message too — whether the city meant to or not. That is what the story is about: their thinking they needed to fake diversity. What a slap in the face of the people who are living it every day.

So yeah, I “meant it” when I implied that people can be rightly offended by the city feeling it needed to fake diversity.

But I’m happy to say that not all Torontonians are as clueless as the city’s employees. Nicole in Toronto:

This isn’t a criticism – I totally get the joke. We’re a politically correct bunch up here and our bureaucracy is as goofy as you’ll find anywhere, but I did want to say that we really are a diverse city. Don’t quite know why they had to fake the photo, but please let everyone know – regardless of race, religion, or sexual orientation, you can have a great time in Toronto. The city’s two best summer events are the huge Gay Pride Weekend (unfortunately, you’ve just missed it) and Caribana – the biggest Caribbean celebration outside of the Islands, which starts next week. Okay, we’re a bit stinky right now with a garbage strike, but it’s still a pretty fun city to visit. And it’s not nearly as WASP as you’d think, so come and check out the city in person – a virtual visit just isn’t the same!

I also got a lot of complaints when I mentioned several weeks ago that I was traveling to “Pittsburg” when, in fact, I was on my way to Pittsburgh, Penn.

Most said or implied I was stupid for making such a mistake. I don’t consider it stupid: I’m from California, and spent a good part of my life near Pittsburg, Calif. So sue me that I got used to a different, not a “wrong,” spelling.

It could be worse — much worse. The first skyscraper in Pittsburgh (the one in Pennsylvania) is the Grant Building, constructed in 1928. To make it even taller, they put a tower on top for KDKA radio’s broadcast antenna. The then Secretary of Commerce, Herbert Hoover, asked the city to put a flashing beacon on the tower for airplane safety, and city fathers decided if they had to have a flashing beacon, it should “say” something.

So the beacon flashed in Morse Code “PITTSBURGH”. Well, it did until the current building owners made a change. Now, according to a story in the Pittsburgh Post-Gazette, it says “PITETSBKRRH”.

So before you go around calling someone from out of town “stupid” for being in too much of a hurry to notice he used a variant spelling, maybe you should stop to first realize the impression you are flashing out to the world! Because let me tell you, not everything you write is perfect either.